Nemak has a portfolio of more than 60 customers, including some of the world’s leading automotive groups and their subsidiaries. 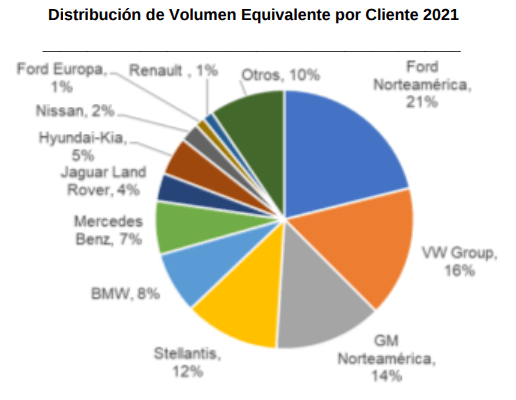 Nemak is a single-source supplier for most of the components it produces and has been designated as a supplier for the entire engine design life cycle, which historically comprises six to eight years.

Nemak has a global presence. In 2021, 51% of its sales came from North America, 37% from Europe and the rest from other parts of the world.

In addition, Nemak has approximately 21,000 employees worldwide, with a presence in high-growth regions, including facilities in North America, Europe and Asia.

Nemak’s facilities are strategically located in close proximity to the engine plants of leading automotive OEMs.

Consumer demand for new vehicles drives vehicle production by OEMs and, in turn, generates demand for parts produced by Nemak.

In 2021, 87% of the company‘s sales were to the following global automotive groups, which are BMW, Ford, GM, Hyundai-Kia, Jaguar Land Rover, Mercedes Benz, Renault-Nissan, Stellantis, and Volkswagen Group.

On the one hand, the company’s net sales reached Ps. 24.665 billion in the third quarter of the current year, 43.3% higher on a year-over-year basis.

This increase was mainly driven by higher volume and higher aluminum prices, which overcompensated for the negative effect of exchange rate fluctuations.