The Bank of Mexico (Banxico) conducted an analysis of the concrete benefits resulting from nearshoring in Mexico.

Nearshoring is the practice of transferring a business operation to a nearby country, especially in preference to a more distant one.

Consequently, Mexico is a natural candidate for the relocation of companies that supply goods to the U.S. market. 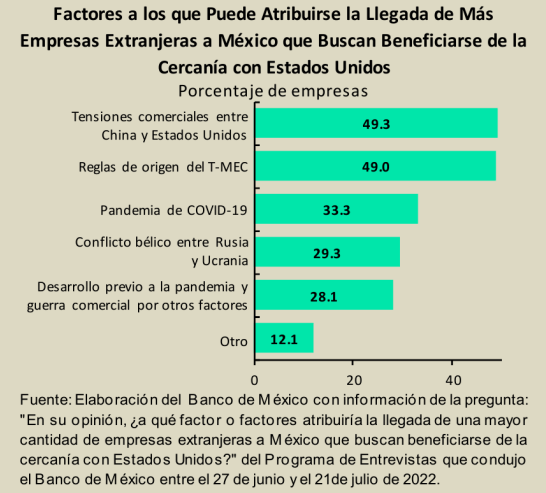 According to the companies contacted as part of Banxico’s interview program, there has been an increase in the arrival of foreign companies in Mexico seeking to benefit from the proximity to the United States.

This is mainly due to the trade tensions between China and the United States and the USMCA rules of origin, which were mentioned by 49.3% and 49.0% of the companies interviewed respectively.

In addition, 33.3% of contacts mentioned that this was due to the Covid-19 pandemic, 29.3% to the war between Russia and Ukraine, and 28.1% indicated that this was developing earlier due to other factors.

In the July 2022 survey of the Monthly Survey of Regional Economic Activity (EMAER), company representatives were asked whether their production, sales or investment had increased in the last 12 months as a result of nearshoring.