In Mexico and the southern United States, at least four steel plants are being built, according to the company Ternium.

Among the company’s largest foreign competitors in the flat products market in Mexico is ArcelorMittal, which began work to launch a new hot-rolling mill in Mexico in 2021.

Also notable is Nucor Corporation, which expects to begin operations of a new galvanized steel facility in 2020 through a joint venture with JFE Steel Corporation. Another of its competitors is US Steel.

In the corrugated rebar market, Ternium’s biggest competitor is ArcelorMittal. To a lesser extent, Ternium also faces competition from Deacero and Grupo Simec, controlled by Grupo ICH, and Gerdau Cosa.

In the low-carbon wire rod market, Ternium’s main competitors are Deacero, ArcelorMittal and, to a lesser extent, TYASA and Simec. 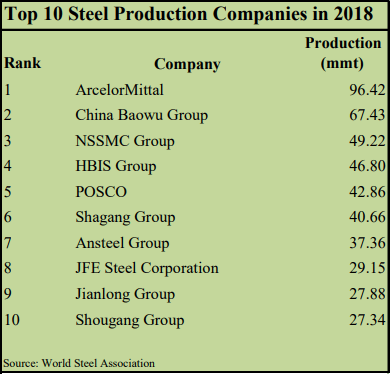 Finally, in the market for small diameter welded tubes, Ternium’s main competitors, which are also customers, are Productos Lacidos de Monterrey (Prolamsa) and Grupo LM. Orders in this market are typically small and cover a wide range of product specifications.

According to the National Chamber of the Iron and Steel Industry (Canacero), imports of finished flat steel products in Mexico represented approximately 8.2 and 8.0 million tons in 2019 and 2018, respectively.

Other competitors, who are also clients, with facilities in the country are Galvasid (controlled by Grupo LM), a producer of galvanized coils; Zincacero (controlled by Grupo Villacero), a producer of galvanized and prepainted coils; Posco, a Korean steel company with a galvanizing facility; and Talleres y Aceros (TYASA), which owns a Castrip flat steel mill and has begun work to start up the galvanizing and painting facilities.