The Ministry of Economy reported that Mexico is preparing a quota for chicken imports for 30,000 tons.

For now, the quota is under review in the National Commission for Regulatory Improvement (Conamer).

It is an added quota to import fresh, refrigerated or frozen chicken meat as of December 31, 2021.

The companies that obtain part of this quota must consider that the corresponding certificates are nominative, non-transferable and non-extendable.

Likewise, the validity of the certificates will be 60 calendar days, counted from the date of issue, or December 31, 2021, whichever occurs first. 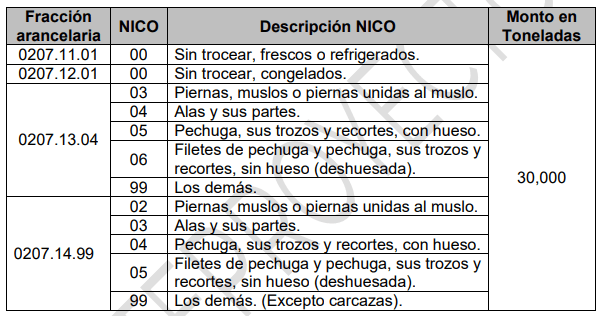 The information regarding the evolution of the requests and authorizations referred to in this Agreement will be published in the Transparency section available on the SNICE electronic portal, on this website.

Chicken meat is the one most consumed by the Mexican population and constitutes a high source of animal protein that provides great benefits to human beings.

According to information from the National Institute of Statistics and Geography (INEGI), in the first quarter of 2021, the National Consumer Price Index (INPC) for chicken meat showed a price increase from January to April compared to 2020 (January 21.4%, February 24.9%, March 21.5% and April 22.8 percent).

For all this, argued the Ministry of Economy, it is necessary to offer the national food industry access to the best opportunities available in international markets in order to reduce costs and, with this, promote its competitiveness and better prices to the final consumer.

It is the responsibility of the Ministry of Economy to formulate and lead the general policies of industry, foreign and domestic trade, supply and prices of the country.