Some mining operations carried out by Canadian companies continue to be criticized, despite the social responsibility actions promoted by the Canadian government, said the US Government’s State Department.

“Despite the increased level of official attention paid to Responsible Business Conduct, the activities of Canadian mining companies abroad continue to receive critical attention and have prompted calls on the government to go beyond voluntary measures. Canada supports the Extractive Industries Transparency Initiative (EITI),” said the State Department in its Report on the State of Investments in Canada 2020, released on Wednesday.

In general, the Government of Canada encourages Canadian companies to observe the OECD Guidelines for Multinational Companies in their overseas operations and provides a national point of contact to address issues that arise in relation to Canadian companies.

In addition, Canada defines responsible business conduct as Canadian companies that conduct business abroad in a responsible manner in an economically, socially and environmentally sustainable manner.

On April 8, 2019, Canada announced the appointment of Sheri Meyerhoffer as Canadian Ombudsperson for Responsible Company.

It is mandated to review allegations of human rights abuses arising from Canadian business operations abroad.

A powerhouse in the mining sector, Canada is among the top five countries in global production of 13 major minerals and metals.

Also Canada is one of the largest mining nations in the world, producing more than 60 minerals and metals.

Sources and Destination of FDI 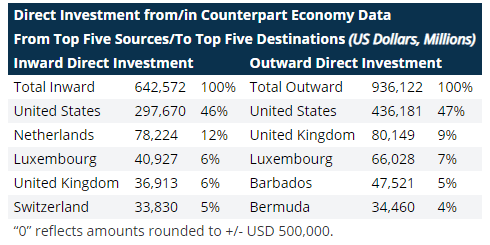 The mining industry employs more than 373,000 workers nationwide in the extraction, smelting, fabrication and manufacture of minerals, and indirectly employs 190,000 more people.

Canada has one of the largest mining supply sectors in the world, with more than 3,700 companies providing engineering, geotechnical, environmental, financial and other services.