As part of the leadership in the Mexican mining sector, Sergio Almazán Esqueda was elected as president of the National Directive Council (CDN) of the Association of Mining Engineers, Metallurgists and Geologists of Mexico (AIMMGM) for the 2020-2022 biennium.

Almazán served for several years as general director of the Mining Chamber of Mexico (Camimex).

In the country, the sector has been officially recognized as an essential activity, which cannot be stopped and which constitutes the beginning of the large productive chains of practically all industrial sectors with high added value.

In turn, the AIMMGM is a group with more than 60 years of experience, which since its foundation has promoted the development and professionalization of the mining sector and is made up of experts and people related to the industry, from various regions of the world. country.

The Association works through two instances: the CDN and the Districts, which are the representations located in cities or mining towns.

Currently, Mexico occupies the first 10 positions worldwide in the production of 17 minerals. The mining-metallurgical GDP represented 8.1% of the industrial GDP and 2.3% of the national GDP in 2019.

However, mining experienced a year of setbacks or stagnation in practically most of its indicators in the past year, due to the contraction of the productive apparatus and the complex international context, which worsened in 2020 with the Covid pandemic. 19.

During the protest of the CDN, the undersecretary of Mining of the Ministry of Economy, Francisco Quiroga Fernández, commented that Mexico is facing not only a health crisis, but also an economic crisis, in a context in which this industry will be an essential engine of reactivation .

Quiroga said that in the sector a new dialogue is required that includes the public sector and called on the AIIMGM to play a preponderant leadership role in the transformation of the sector. 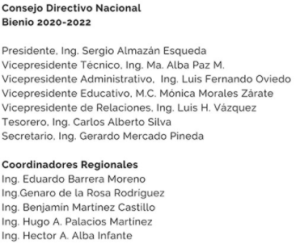 According to an AIMMGM statement, mining requires a redefinition to reach certainty based on consensus and dialogue, because this economic activity has the capacity to become a development engine that generates foreign exchange, social development in communities and strengthens the economic plant of the country.

For his part, Fernando Alanís, president of Camimex, considered that given the great challenges we face, “we cannot be passengers in this world. We have agents of change, be participatory and proactive ”.

The challenges lie in how to achieve a new adequate relationship with the new government and that implies demands such as having a greater presence and participation as a union.