The Mexican mining sector captured 873 million dollars of Foreign Direct Investment (FDI) in the first half of 2020, a year-on-year decrease of 18.6%, according to statistics from the Ministry of Economy.

Mexico has a substantial variety of mineral resources and is one of the world’s leading producers of silver, bismuth, antimony, fluorite, graphite, barite, molybdenum, lead, and zinc.

According to the Constitution and applicable Mexican laws, mining activities can only be carried out by the government or, alternatively, by Mexican natural or legal persons, if they are granted a concession from the government.

Foreign investment, including controlling interests, in Mexican mining companies is permitted under Mexican law, with the exception of any extraction of radioactive minerals.

Likewise, foreign investment and mining regulations allow foreign investors to have a majority stake in any Mexican company engaged in the mining industry during the concession period.

These foreign investment regulations promote the development of this eindustry, since they allow: broader exploration; the discovery of new sources of financing, and the further development of national technology.

Under the Mexican Mining Law, private companies receive concessions to explore for up to six years and to exploit for up to fifty years.

The amounts reported only consider investments made and formally notified to the National Registry of Foreign Investments of the Ministry of Economy; hence its preliminary nature and the fact that it undergoes updates in successive quarters. 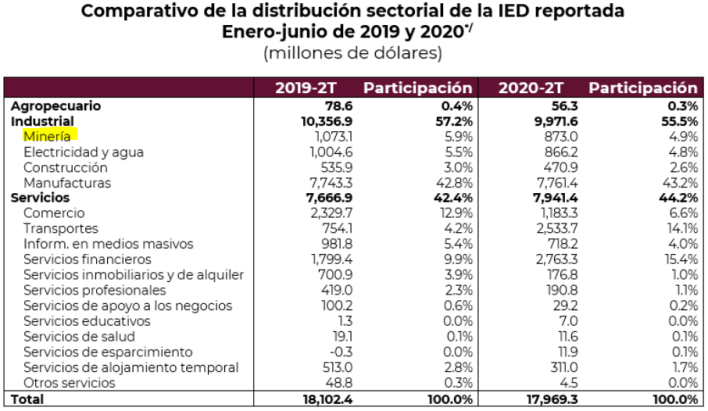 Around 25% of the Mexican territory has been explored in detail, so there is great opportunity for the development of new projects. Mexico places 12 to 19 minerals year after year within the top 10 production sites globally.