In addition to the general reactivation at a national and global level, the increase in the average prices of the main metals has favored the evolution of the value of national mining-metallurgical production.

The greatest dynamism was seen in industrial metals, a group whose value reached 134.4 billion pesos, an increase of 30.2 percent. 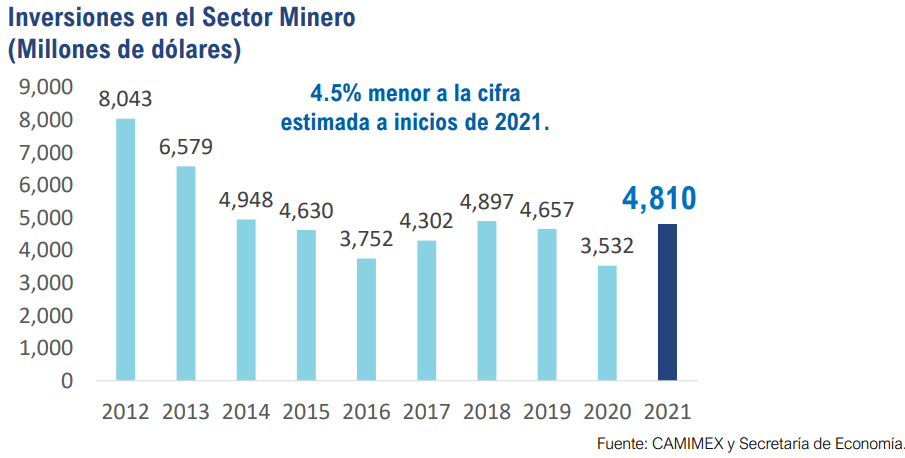 In particular, gold remained the main product of the national mining-metallurgical industry in 2021, with a 28.4 percent share of total production value, followed by copper with 27.7 percent and silver with 20.4 percent.

On the other hand, with the economic reactivation and the return to operations, investments in the mining industry also increased from US$3,532.6 million in 2020 to US$4,809.6 million, an increase of 36.1 percent.

Regarding the exploration indicator, it also rose 61.1%, the companies affiliated to Camimex reported an amount of 391.6 million dollars.

For 2022, an increase in investment amounts is estimated, with a total of 5,538.8 million dollars, a figure that will nevertheless be below the level reached in 2012.

With respect to FDI, based on information from the National Foreign Investment Commission of the Ministry of Economy, 31,621 million dollars were captured nationally in 2021, 8.7% more than the previous year; new investments were the item with the most financing, followed by reinvestment of profits.

By economic sector, FDI flows focused on manufacturing industries with 39.7%, followed by mining with 15.2%, followed in third place by financial and insurance services with 15%, and then the transportation sector with 8.8%.

At the end of the period, the mining component reached 4,800.5 billion dollars, the metallic mineral mining subsector presented an increase of 2,832 million dollars, a figure 4.5 times higher than that recorded in 2020.