Mining in Mexico registered a year-on-year drop of 29.8% in its investments in 2020, to 3,533 million dollars, reported the Mexican Mining Chamber (Camimex).

With this, two years of negative results were accumulated in this indicator, since it has been affected by competitive conditions.

In general, said Camimex in its annual report, mining is an essential element in the economic reactivation of the country, but for it to unfold its full potential, it requires a State policy that provides certainty.

In 2020, the mining-metallurgical sector in Mexico represented 8.3% of the Industrial GDP and 2.3% of the National GDP, according to Inegi figures. 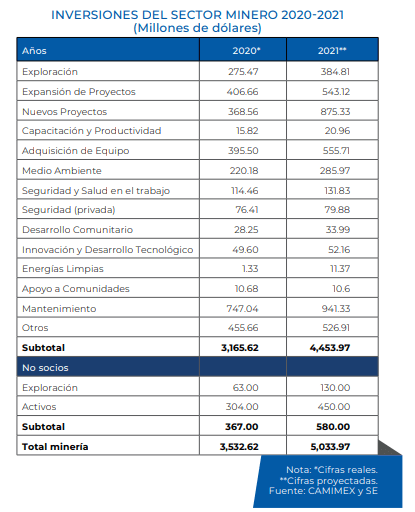 “In the framework of the health emergency caused by Covid-19, the industry supported employees, implemented actions and has maintained an essential role in the localities, supporting hospitals and the population, making doctors available to the communities; donating food packages; handing out cleaning kits; conducting information awareness campaigns on prevention; among many other things that add to the health care of the population,” said Fernando Alanís Ortega, president of Camimex.

In Mexico, the first case of Covid-19 was identified on February 27, and on March 23 the start of the National Sana Distancia Day was decreed, which included the closure of all economic activities considered “Non-Essential.”

Thus, it was until May 12 that the Government of Mexico published in the Official Gazette of the Federation that mining would be considered an essential activity, understanding the importance of the sector as a provider of strategic inputs for other activities that had been declared essential, but also for its role as a support arm to face the pandemic in remote regions and where communities required our support.

In 2020, the participation of women in the mining-metallurgical sector was 15.7%, despite the decrease in the total number of jobs, 3% less in the case of women, it remained at the same level of proportion as in 2019.