The mining sector led mergers and acquisitions activity in Mexico with 25 announced transactions, representing 20.5% of total transactions in the period, according to Camimex.

The following mining operations stood out:

According to the General Directorate of Mining Development of the Ministry of Economy, in 2020, 179 Mexican companies with foreign capital were identified operating in Mexico, of which 70% corresponded to Canadian capital, 11% to US capital and 4% to Chinese capital. 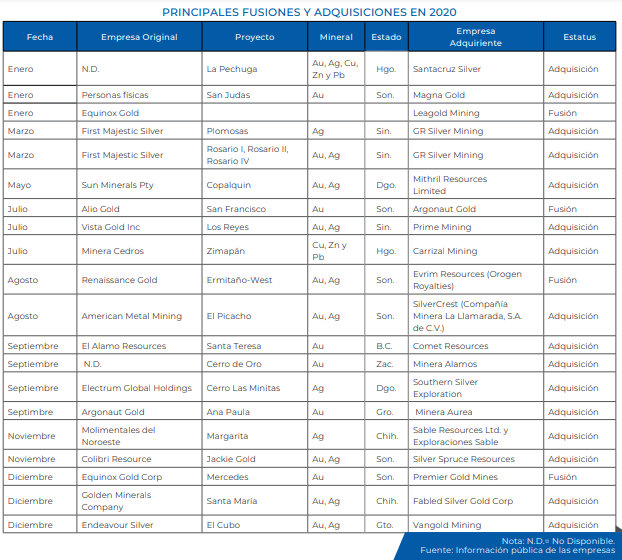 In addition, companies from Japan, the United Kingdom, Australia, Korea, India, Spain and France, among other countries, were registered.

Likewise, in 26 states of the nation there is a presence of 1,190 mining projects, concentrating the largest number of these in Sonora, with 276; Chihuahua, with 157; and Durango, with 126.

On the other hand, a total of 307 projects are in the exploration stage, 78 in production, 43 in development, while 754 projects are in postponement and 8 operations reported closure.

Regarding the transaction market, in Mexico, the firm Seale & Associates announced 122 operations, representing a decrease in volume of 27.8% compared to 2019. The total announced value of transactions was 3,100 million