Inegi described mining in Mexico by the type of final benefit process in accordance with the results of the 2019 economic censuses.

The final primary beneficiation process was carried out in 901 units to separate the mineral from its inherent contents; Of these, in 649 units crushing, grinding, dimensioning or washing was applied, mainly in sand and gravel mining for construction, followed by other dimensioned stones and limestone mining.

In this process, the mineral is ground or crushed into different sizes, it can even be dimensioned in the form of blocks or slabs.

On the other hand, concentration by flotation refers to the separation of solid particles from a liquid mass by the effect of chemical reagents, it was mainly used in silver mining.

Second, in lead and zinc mining, as well as copper and gold mining.

Regarding leaching, this is the hydrometallurgical process by which metals are recovered from their ores or concentrates, by dissolving them by means of a reagent and then precipitating it, obtaining a purer material.

This processing was carried out in 2.4% of the beneficiation plants, concentrating on metallic mining: gold, silver, copper, lead and zinc.

Gravimetric concentration, which refers to the separation of minerals of different densities by gravity, was carried out mainly in gold and silver mining, representing 13.4% in conjunction with flotation and magnetic concentration.

According to the type of excavation in mining in Mexico, surface mines predominated with 86.3%, mainly represented by the mining of other dimensioned stones. 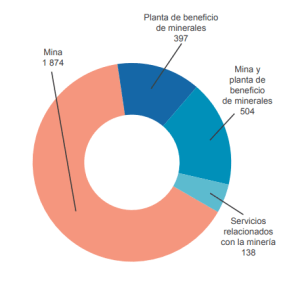 It is worth mentioning that the extracted mineral can be sold as it is obtained without requiring more processes, especially when it comes to stone aggregates; for other minerals such as metals or clays, it is transferred to processing plants before being used by other industries.