Cars, computers and auto parts led Mexico’s main exports in 2019, according to data from the Ministry of the Economy.

In general, the automotive sector has had a strong dynamism in recent years with the arrival of new assembly plants and the increasing integration in global value chains, especially with North America. 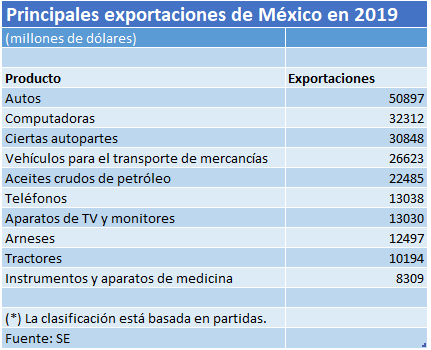 Other foreign sales of the country that stood out in 2019 were those of crude petroleum oils, television sets, harnesses and medical instruments.

Foreign trade is the exchange of consumer goods, intermediate use or capital that takes place between residents of different countries.

This exchange is made due to differences in production costs between countries.

Additionally, trade increases the economic well-being of each country that participates in these operations, since in each one the volume of goods and services available for consumption increases and production increases.

However, changes in the quantity and composition of foreign trade are one of the indicators of a country’s development and economic growth.

The interior is manifested in the ability to substitute imports or increase exports of manufactured products.

No country is self-sufficient, not because it lacks the ability to produce a certain type of merchandise, but because it is convenient to specialize in the production of those articles in which it has lower production costs and to buy from other countries the merchandise whose domestic production is more expensive.

These basic principles must be adapted to the industrial and agricultural conditions and policies of each country so that the best results of the trade process can be obtained.

In other words, the comparative advantages in production costs of the different countries lead them to the complementarity of the economies.

US restricts exports to China, Russia and Venezuela