The main suppliers were the United States, Thailand and Argentina, according to data from the Ministry of the Economy.

India leads the world’s largest rice exporters, while other major traders are the United States, Vietnam, Pakistan, and China. 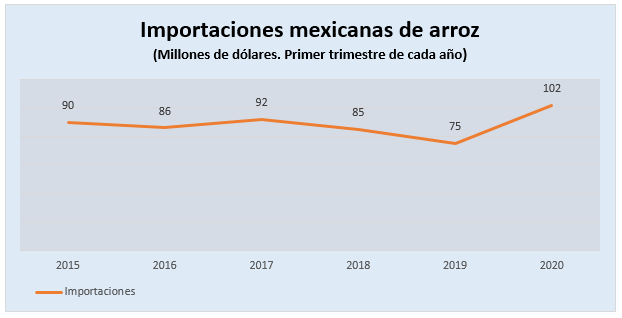 At the same time, Mexico marginally exports rice to the United States, with shipments of 0.5 million dollars in the first two months.

According to the Food and Agriculture Organization of the United Nations (FAO), the prospects for a strong recovery in world rice trade in 2020 have been dimmed by expectations that wide local availability will keep demand for imports from Asian countries for one more year.

However, global rice flows in 2020 are forecast to exceed the 2019 level, as imports are expected to rise in all other regions.

This is particularly the case in Africa, where countries such as Guinea, Senegal and Nigeria would have to buy more to compensate for reduced production levels.

With the exception of Australia, Brazil and Thailand, all traditional rice suppliers are expected to increase their exports in 2020, although the largest increases should be seen in India and China.

Indeed, continued growth in Chinese rice exports in 2020 could essentially eliminate the trade imbalance that China has had since becoming a net rice importer in 2011.

Growth in the use of rice for human consumption is forecast to slightly outpace population growth in 2019/20, raising global utilization to a level that exceeds expected production.

As a result, global rice stocks at the end of the 2019/2020 marketing years could decrease, although to a level that would continue to stand out as the second highest in history.

Rice importers are expected to be responsible for the entire stock reduction, led by the reductions in China and, to a lesser extent, in Bangladesh and Indonesia. In contrast, the reserves of the top five exporting countries could reach their highest level in five years, mainly due to another expected build-up in India

The peso loses 47 cents against the dollar