Mexico is a major exporter of crude oil, the third largest in the Americas behind the United States and Canada.

From January to September 2020, Mexico’s oil exports totaled 188 million 730,000 barrels, an increase of 12.3%, at an annual rate, according to data from the United States Energy Information Administration (EIA).

In 2019, Mexico exported 1.3 million b/d of crude oil. The United States received 51% of Mexico’s crude oil exports, most of which came by tanker.

Mexico is the second largest source of crude oil imports to the United States (behind Canada).

Mexico’s oil exports to the US market have declined since 2010, reflecting the steady decline in Mexico’s crude oil production, along with dramatic increases in US production in recent years.

Most of Mexico’s crude oil exports to the United States are Mayan mix.

Mexico retains most of the production of its lighter crude oil flows (Isthmus and Olmeca) for domestic consumption.

The United States received the majority of Mexico’s crude exports due to the proximity of the two countries and the operation of sophisticated refineries on the US Gulf Coast capable of processing heavier Mayan crudes.

Despite its status as a large crude oil exporter, Mexico is a net importer of refined petroleum products.

The decline in domestic production of liquid transportation fuels has increased Mexico’s use of foreign sources of refined petroleum products.

Pemex maintains control over a large part of the import and distribution of petroleum products from Mexico. 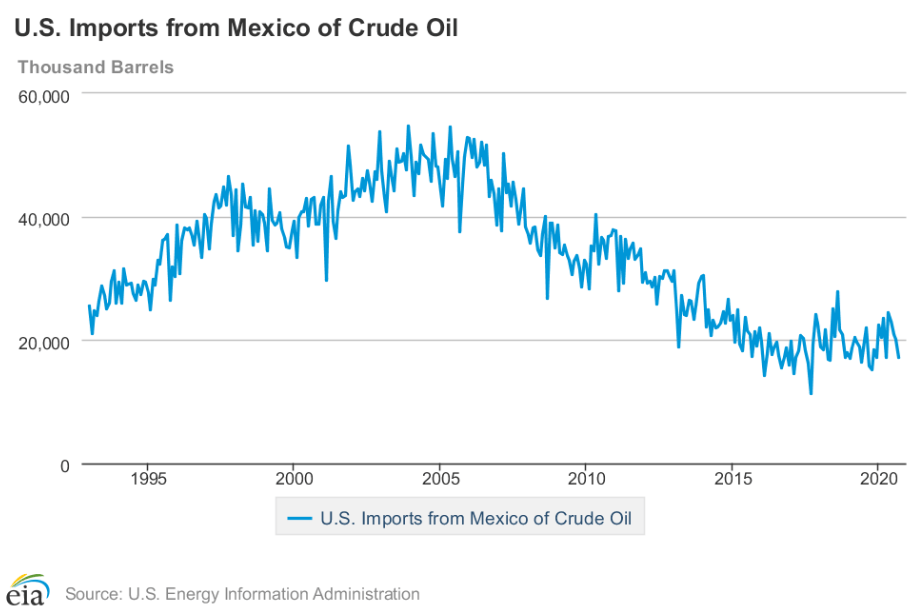 Of these imports, 62% was gasoline and most of the rest was diesel and liquefied petroleum gases (LPG).

According to EIA data, Mexico was the destination for 59% of U.S. motor gasoline exports completed in 2019.

The United States imported 51,000 b/d of that total exports, most of which were residual fuel oil and naphtha.

As with crude oil, U.S. imports of refined petroleum products from Mexico have declined in recent years from a peak of 132,000 b/d in 2010.