Mexico recorded a 33% year-on-year increase in its light vehicle exports in September 2022, to 259,792 units, Inegi reported on Thursday.

According to the Bank of Mexico (Banxico), the evolution of manufacturing activity during the second quarter reflected the recovery of the automotive industry in the central regions, although showing some deceleration in the central north, and a slight contraction in the north, where it remains at relatively high levels. 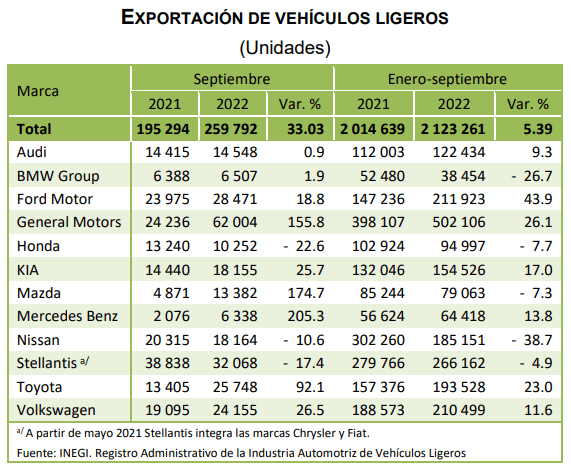 Looking forward, among the external factors common to all regions, the executives consulted by Banxico anticipate that both automotive and non-automotive exports will continue to expand.

They also expect that companies from Asia will continue to relocate to Mexico (nearshoring) to supply the US market.

This would encourage the construction of industrial buildings and, with it, the demand for materials such as glass, gravel, copper, aluminum, lime and steel.

Among the internal factors driving demand, the automotive sector mentioned the growing production of specific auto parts for electric and hybrid cars.

The Mexican government affirms that it continues to support the early reactivation of supply chains, mainly those integrated to the North American regional market.

In particular, the Mexican government is directing policies to promote productive activities in sensitive sectors such as the automotive sector, contributing significantly to Mexico’s economic recovery, with foreign trade as its engine of growth.

Among the common elements that boosted manufacturing in the April-June period, the managers interviewed by Banxico from all regions highlighted the sustained advance of non-automotive exports, mainly to the United States.

Meanwhile, the sources consulted in the north and central regions pointed to an increase in automotive exports to the United States as a favorable element for their activity.