Mexico’s gross collection from foreign trade operations totaled 420,889.3 million pesos in the first half of 2020, a decrease of 13.3% year-on-year, according to data from the Ministry of Finance and Public Credit (SHCP).

On the other hand, in January-June 2020, the amount collected for self-declaration of taxes from passengers at airports and borders totaled 471.3 million pesos.

This amount was lower than the income of 693.2 million pesos obtained in the same semester of the previous year, due to lower passenger traffic due to the contingency derived from Covid-19.

During the second quarter of 2020, Mexico’s foreign trade decreased given the context of the slowdown in global economic activity due to the effects of the pandemic.

In context, there was a 16.9% annual drop in world trade volume in the April-May 2020 two-month period, while United States industrial production contracted 14.5% in the second quarter of 2020, compared to the same period of 2019. 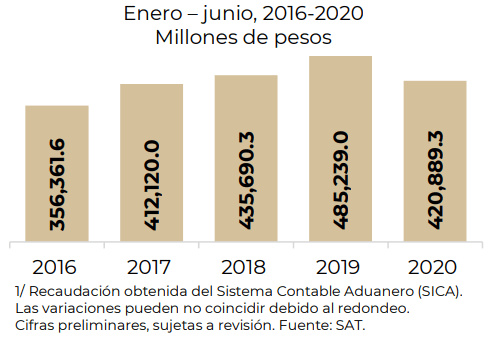