Mexico‘s exports grew 25.2% in August, to 50.67 billion dollars, above the average of what they had previously increased in 2022.

With this, Inegi reported that Mexican exports accumulated an increase of 18.9%, to 377,945.8 million dollars.

On the other hand, Mexico imported products for a customs value of 56,168.2 million dollars in August, 27% more at inter-annual rate. 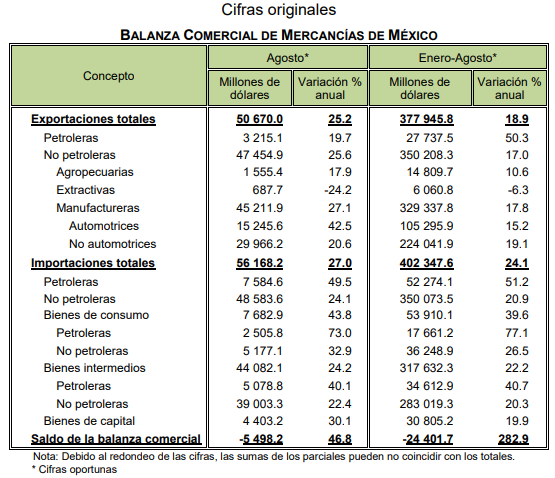 Consequently, Mexico had a negative balance in its trade balance of 5,498.2 million dollars in August and 24,401.7% from January to August.

In the month of reference, total exports increased 25.2% at annual rate, as a result of 25.6% increases in non-oil exports and 19.7% in oil exports.

Within non-oil exports, those directed to the United States grew at an annual rate of 27.6% and those channeled to the rest of the world, 17%.

In turn, in August 2022, the value of merchandise imports was 56.168 billion dollars. This amount represented an annual increase of 27 percent, reflecting growth of 24.1 percent in non-oil imports and 49.5 percent in oil imports.

When considering imports by type of good, annual increases of 43.8% were observed in imports of consumer goods, 24.2% in intermediate use goods and 30.1% in capital goods.

Timely foreign trade information for August 2022 recorded a trade deficit of US$5.498 billion, a balance that compares with a deficit of US$3.744 billion in the same month of 2021. In the first eight months of 2022, the trade balance presented a deficit of US$24.402 billion.