Mexico’s economy registered a fall of 18.9% in the second quarter, on an annualized basis and with seasonally adjusted figures, the Inegi reported.

During the first semester of 2020, the opportune GDP decreased 10.5% compared to the same period in 2019, with seasonally adjusted series.

It should be noted that the appropriate estimates provided could change with respect to the figures generated for the traditional quarterly GDP, which will be published on August 26, 2020.

The vast majority of economic series are affected by seasonal factors, these are periodic effects that are repeated every year and whose causes can be considered unrelated to the economic nature of the series, such as holidays, the fact that some months have more days than others, the periods of school vacations, the effect of the weather in the different seasons of the year, and other seasonal fluctuations such as, for example, the high production of toys in the months before Christmas caused by the expectation of higher sales in December. 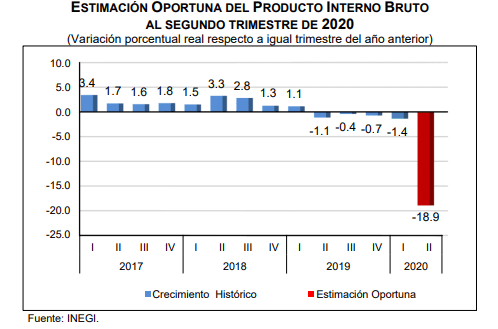 In this sense, the deseasonalization or seasonal adjustment of economic series consists of removing these periodic intra-annual influences, since their presence makes it difficult to diagnose or describe the behavior of a series by not being able to adequately compare a given quarter with the immediately previous one.