Corn exports from Mexico reactivated in the first quarter of 2020, doubling (103%) at the interannual rate, to reach 71 million dollars.

According to data from the Ministry of the Economy, Mexican corn exports went mainly to Venezuela, while other destination markets were the United States, Guatemala, El Salvador and France.

The Mexican economy tends to be self-sufficient in white corn (flour), but registers a deficit of yellow corn, a variety used in the livestock and industrial sectors. 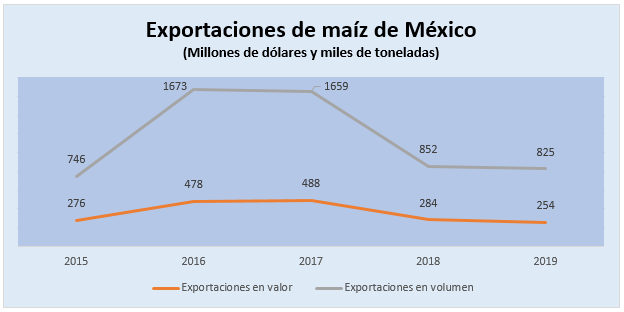 Corn is the most imported agricultural product by Mexico, the most cultivated by Mexican farmers and a powerful pre-Columbian symbol for its importance in the fields of economy, politics and society.

According to FAO forecasts, the total use of coarse grains in 2019/2020 will remain close to the 2018/2019 level, as the strong growth in the use of barley, which registers an increase of almost 5%, is likely. % as of 2018/2019, is offset by a decrease in sorghum consumption, while corn consumption should remain stable.

For the first time in nearly a decade, 2019/2020 is likely to see a contraction in the use of coarse grains for feed, especially corn.