Mexico was ranked as the first commercial partner of the United States in the first half of 2021, reported the Census Bureau.

Of all merchandise trade between the United States and the world, Mexico’s share was 14.7% in that period.

In retrospect, according to an analysis by ECLAC, imports from the other two partners of the United States in the USMCA, Canada and Mexico, are relatively stable and represent between 24 and 29% of total US imports. 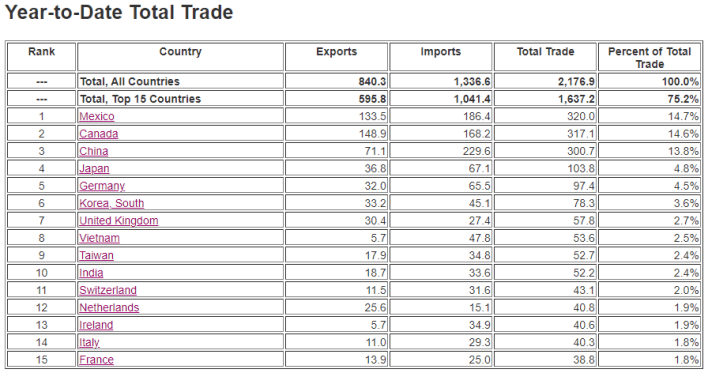 The main change is in the distribution between Canada and Mexico, with Mexican exports gradually outpacing Canadians.

For its part, China‘s progression is even more impressive, since its share of US imports nearly quadrupled between 1990 and 2020.

This progression, adds the same analysis, reduces the weight of the advanced economies (except Canada) and the Western Hemisphere (mainly Latin American and Caribbean countries, less Mexico).

At the same time, different trends are observed for exports, with the exception of “trade with other advanced economies”, which follows the same trend.

Among the USMCA partners, Canada retains its leadership position as an important market for US products, even if the weight of Mexico increases significantly.

The rest of Latin America and the Caribbean attracts more exports from the United States, as well as from other emerging and developing countries.

The source of discrepancies between US imports and exports is China’s relatively small weight as an export market for US products.

China absorbs less US merchandise than the sum of the countries of Latin America (excluding Mexico) and the Caribbean.

For many years, Canada was the first trade partner of the United States, until China displaced it from 2015 to 2018, while Mexico occupied that position for the first time in 2019.

In 2020, Mexico’s merchandise exports to its northern neighbor totaled 325.394 million dollars, a year-on-year decrease of 9.1 percent.