The Mexican Ministry of Economy will require automatic permits prior to steel exports corresponding to more than 60 tariff fractions starting next week.

“In order to avoid triangulation in the trade of certain steel products between Mexico and the United States of America, it is necessary to implement a prior automatic permit scheme in which the exporter provides the minimum elements to determine that it is indeed manufactured steel goods. in Mexico ”, said the Ministry of Economy in an agreement published this Friday in the Official Gazette of the Federation (DOF).

The Regulation of the Foreign Trade Law provides that, for the purposes of keeping a record of foreign trade operations, as long as there is no other administrative procedure that allows the supervision and monitoring of said operations in a more agile manner, the Ministry of Economy may subject the export or import to the automatic permit requirement.

The Secretariat will approve automatic permits for steel exports to all individuals or corporations who meet the legal requirements to carry out foreign trade operations.

Likewise, he argued, ex-post monitoring does not allow verifying the traceability of steel goods and there is no other procedure that allows the supervision and follow-up of such operations in an agile manner.

On March 8, 2018, the President of the United States issued Executive Order Presidential Proclamation 9705, through which he imposed tariffs of 10 and 25% on all imports to that country of aluminum and steel products, respectively; Therefore, as of June 1, 2018, Mexico was affected with them and with the presidential proclamations 9739 and 9740 issued on April 30 of that same year.

Finally, both governments jointly announced the conclusion of the imposed measures and on May 17, 2019, a joint Declaration was adopted between the United States and Mexico on Section 232 tariffs on aluminum and steel.

To comply with the commitments established in the Declaration, the government of Mexico established modifications to the Rate of the General Import and Export Tax Law, with the aim of facilitating the comparability of steel products with the categories of Section 232 of the US Trade Expansion Act of 1962; and a statistical monitoring and follow-up system was designed for the conditions of the Mexican market compared to the US market.

Statistics and entry into force

For Mexico, steel production and exports are of great importance. 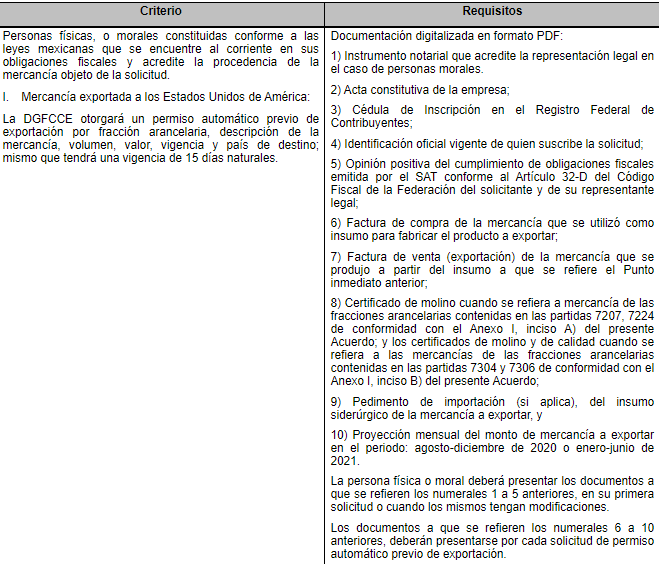 The preliminary premises for steel exports will be required within five days of their publication in the DOF.

As of the day following the publication of this Agreement in the Official Gazette of the Federation, the interested parties may submit applications for the referred steel exports.