Mexico remained the first commercial partner of the United States from January to August 2021, the Census Bureau reported on Tuesday.

Mexico’s total trade with its northern neighbor (imports plus product exports) was $ 431.8 billion, a share of 14.6 percent.

Throughout last year, Mexico ranked as the second largest goods trading partner in the United States, with $ 536.7 billion in total trade (two-way).

According to the Commerce Department, US exports of goods and services to Mexico supported an estimated 1.1 million jobs in 2019 (latest data available).

Additionally, in 2019, hundreds of thousands of people legally crossed the border every day.

At the same time, 1.6 million US citizens live in Mexico, and Mexico is the top foreign destination for US travelers.

Top Trading Partners – August 2021. Data are goods only, on a Census Basis, in billions of dollars, unrevised. 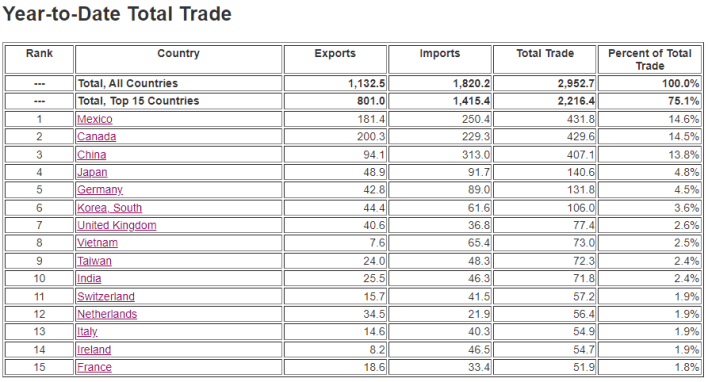 In addition, Mexico was the second largest supplier of foreign crude oil to the United States in 2020, as well as the largest export market for refined petroleum products and natural gas in the United States.

Other important US exports to Mexico include machinery, electrical machinery, vehicles, mineral fuels, and plastics.