As of September 2022, Mexico processed a total of 5.5 million import declaration, 176,200 more than the same period last year.

As a result, this indicator grew at a year-on-year rate of 3.3 percent.

On the other hand, 2.2 million declaration were presented for exports, increasing 6.7 percent compared to the same period in 2021, that is, 136,800 more pedimentos.

Since 2022, customs clearance for the import (and export) of goods is carried out before Mexico’s National Customs Agency (ANAM). 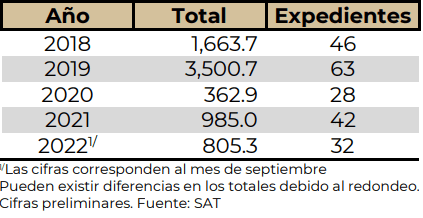 This entity is specifically responsible for verifying the data contained in the pedimentos, declarations or manifestations, including the verification of origin, as well as collecting taxes and customs clearance fees, and verifying compliance with non-tariff regulations and restrictions (RRNA).

ANAM is also responsible for seizing or retaining goods whose legal stay in the country is not proven, and for taking custody of them as a depository.

Suspensions in the registry of importers

As of the third quarter of 2022, 79 suspensions from the importers’ registry have been requested, among the main reasons for such suspensions are having an address not located (66 taxpayers), for not carrying out foreign trade operations in a period exceeding 12 months (12 taxpayers) and for failure to file a tax return or any other tax obligation (1 taxpayer).

From December 2015 to September 30, 2022, 4,470 domicile verifications have been requested, of these approximately 26% were for failure to locate the taxpayer at the tax domicile and/or establishments registered and not registered with the SAT, resulting in the suspension in the importers’ registry.

As of the third quarter of 2022, 32 administrative files have been integrated, whose amount of damage to the Treasury amounted to 805.3 million pesos, representing 81.8% of the total amount observed at the end of 2021 (985 million pesos).

Twenty-seven administrative files were submitted to the General Legal Administration (9 for smuggling, 14 for presumption of smuggling, 1 for equivalent smuggling and 3 for vacating or disappearance of the tax domicile) for analysis and, if applicable, processing as a criminal matter, the amount of which is 541.8 million pesos in damages to the Treasury.

Likewise, 5 files were filed before the Federal Tax Attorney’s Office for tax fraud for an amount of 263.5 million pesos.