Mexico led manufacturing exports in Latin America and the Caribbean in 2019, both in value and in proportion to total exports by country, according to ECLAC data.

Exports of primary and manufactured products and share of total exports, 2019 [A]

Exports of primary and manufactured products, and share of total exports, 2019 [A] 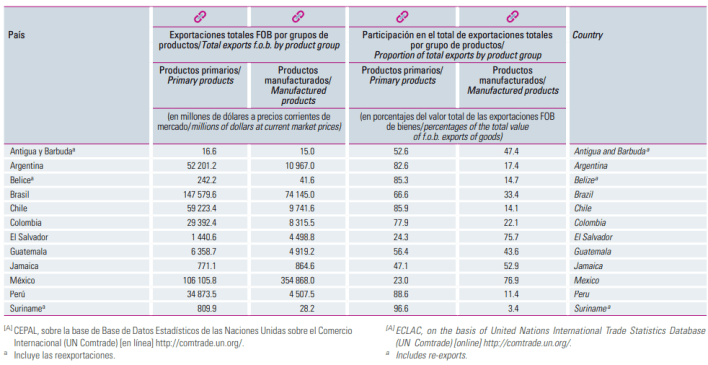 The figures for trade in services are disaggregated according to the main categories of the fifth Balance of Payments Manual of the International Monetary Fund.

Likewise, the data were compiled on the basis of the official foreign trade statistics of the respective countries registered in COMTRADE.

Furthermore, the criterion adopted to classify both primary and manufactured products corresponds to that used by the United Nations Statistics Division to present data on world foreign trade by economic region.

To do this, the sections of the modified SITC are grouped as follows:

It includes the total of the sections:

It includes the total of the sections:

In addition, to give a broader conception of the main export products of each country, the 10 most important have been selected according to the magnitude of their value.