Mexico processed 3.6 million import pedimentos in the first half of 2022, which implied a 3.6% annual growth.

Conversely, 1.4 million pedimentos were filed for exports, increasing 6.8% compared to the same period in 2021.

On May 9, 2022, the Mexican Ministry of Economy published an updated agreement on the General Rules and Criteria for Foreign Trade. 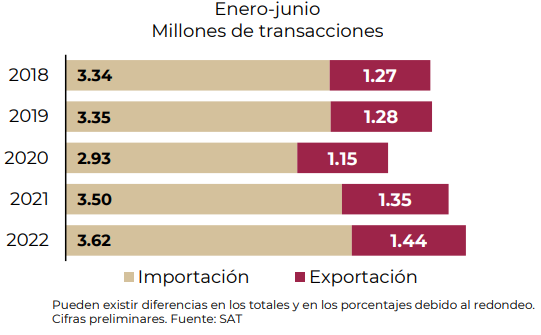 This change in regulation would allow Mexican importers to import through courier and parcel companies:

With this change, the benefit now goes up to $2,500 exclusively for courier and parcel companies.

This change does not affect the overall import duty rates applied to imports through courier and parcel companies, which remain the same.

The U.S. Department of Commerce (USDOC) recommends that U.S. exporters communicate with their Mexican customers about these new benefits.

Also, the USDOC stated that it should be noted that the Mexican government may limit these imports if it is suspected that the importer is using this scheme to avoid regulations, restrictions or tax payments.

Mexico’s Ministry of Economy published on June 7, 2022 the decree issuing the General Law on Import and Export Taxes, which contains new tariffs, taxes and provisions on Commercial Identification Numbers (NICO) and the Harmonized Tariff Schedule (HS Code), following the full implementation of the Seventh Amendment to the Harmonized System directed by the World Customs Organization (WCO) to its members.

The planned changes include international commodity codes for world trade.

U.S. exporters and Mexican importers are responsible for making the necessary updates and using the correct HS code.

Another consideration highlighted by USDOC: since HS codes establish the tariff classification of goods, it is critical that U.S. exporters know their HS codes when shipping to Mexico.

The amendment consists of about 350 changes that will add some goods that will receive new HS codes, change some definitions that need to be improved, and eliminate other codes because the products are considered obsolete.