The number of foreign commercial invoice from Mexico totaled 9,968,000 in 2021, a year-on-year increase of 14.6%, reported the Ministry of Finance and Public Credit (SHCP).

The commercial invoice is the statement in electronic document, generated and transmitted regarding compliance with the laws that tax and regulate the entry or exit of goods from the national territory. 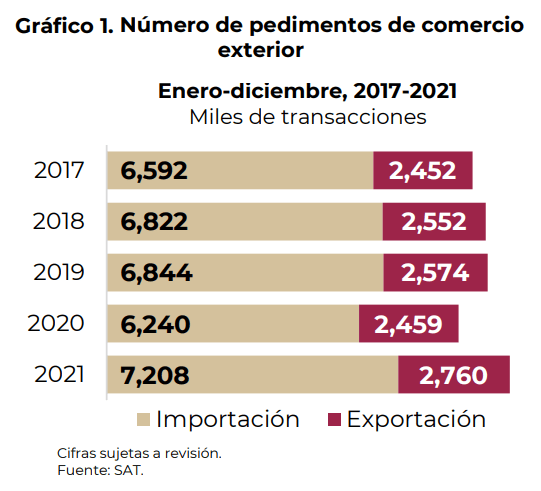 Likewise, this document contains the information related to the goods, the traffic and the customs regime to which they are destined, and the other data required to comply with the formalities of their entry or exit from the national territory, as well as that required in accordance with the applicable provisions.

According to the SHCP, one of the pending issues for the customs operation is to strengthen the fight against smuggling.

Since 2018, the number of commercial invoice shows a sustained increase.

However, the SHCP indicated that this behavior has not been reflected in the collection. In real terms, foreign trade contributions have a decreasing trend for the same period marked by the increase in smuggling.

To combat smuggling, the SAT carries out control processes that seek to reduce illicit trade and position the country on par with the best international practices.

In this sense, the SAT maintains an exchange of information with other tax and customs administrations to jointly combat commercial fraud and inhibit smuggling, money laundering and fraud.

In addition, the SHCP stated that the following measures were taken:

On the other hand, the collection for self-declarations of taxes from passengers at airports and borders at the end of 2021 totaled 1,835 million pesos. This amount was higher by 662 million pesos, a real variation of 48% compared to that obtained in the same period of the previous year.

For its part, the percentage of customs examinations in more than three hours has increased by 9 percentage points compared to 2018, reducing the efficiency of the operation.