Mexico increased its automotive exports in the second quarter of 2021 benefiting from prices, Banxico said.

In the second quarter of 2021, the value of manufacturing exports, both automotive and non-automotive, showed moderate growth compared to the previous quarter. 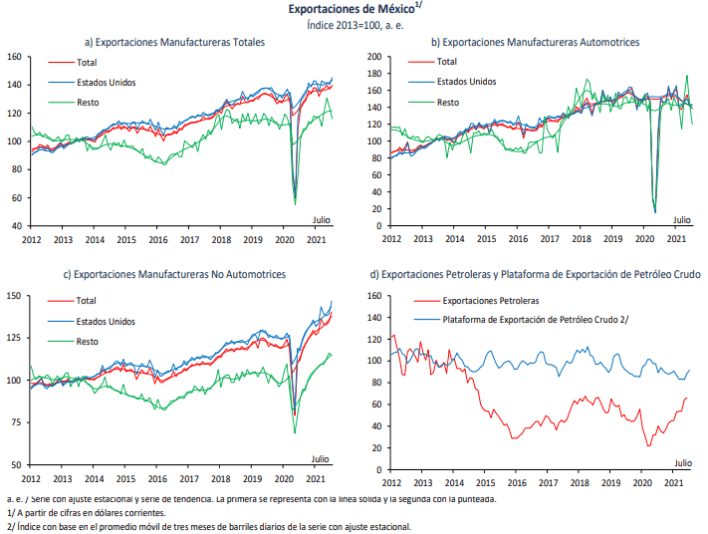 In particular, the increase in the value of automotive exports originated in a context of higher prices for this type of goods, since disruptions in the supply of various inputs have continued to affect their production and export volume.

By destination, manufacturing exports to the United States continued to expand, while shipments to the rest of the world rebounded.

At the same time, in the second quarter of 2021, oil exports increased compared to the previous quarter in seasonally adjusted terms.

This reflects both higher prices of the Mexican mix, and an increase in the export platform.

At the beginning of the third quarter, the value of oil exports continued to increase.

For their part, from April to June 2021, non-oil imports continued to show dynamism, a behavior that persisted in July, standing 19.1% above their level in February 2020 with figures adjusted for seasonality.

Banxico stated that in general, during the second quarter of 2021, the gradual recovery of economic activity continued, although with heterogeneity between sectors.

Specifically, the services continued to be reactivated, in a context in which progress in the vaccination process made it possible to relax the restrictions associated with the health emergency, particularly in sectors with greater face-to-face interaction.

However, uncertainty prevails regarding the evolution of this sector given the recent increase in the number of infections.

In turn, industrial production has shown low dynamism in all the sectors that comprise it, highlighting the weakness of construction and manufacturing.

Among the latter, the difficulties caused by the shortage of certain inputs and other logistics problems, especially in the transport equipment sector, stand out.

For their part, primary activities have registered volatility in their behavior.