Globally, Mexico ranked as the second largest gasoline importer in 2019, with $ 17.6 billion, surpassed by the United States ($ 25.6 billion).

As part of the energy reform, the Hydrocarbons Law and the Hydrocarbons Revenue Law jointly established the new legal framework that regulates activities ranging from exploration, extraction and refining, to the distribution, storage, sale and commercialization of hydrocarbons.

It also allowed Mexican and non-Mexican investors to participate in the bidding process for the exploration, production and transportation of oil and gas.

From January 1, 2016, private companies can own gasoline and diesel service stations that do not have to be a Pemex franchise.

Now private companies can buy gasoline and diesel from abroad.

As of March 31 of the current year, 8,084 gasoline and diesel stations operated under the Pemex Franchise. At the same time, 2,568 service stations operate under brands other than Pemex, which are supplied both by Pemex and by direct importation.

Mexico’s gasoline imports come mainly from the United States and, to a lesser extent, from the Netherlands, Finland, Belgium, South Korea and China, among other countries.

Throughout 2017, the Mexican government gradually removed price controls on gasoline and diesel. 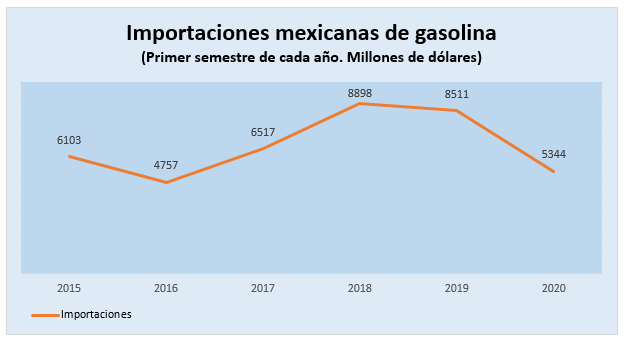 As a result, domestic fuel prices have been fully liberalized and, since November 30, 2017, prices are determined by the market.

The sale prices of fuels are reported by each service station to the Energy Regulatory Commission.