Within Mexico’s non-oil exports, those directed to the United States fell at an annual rate of 7.3% and those channeled to the rest of the world fell 6.6 percent.

Exports of manufactured products in July were 32.613 million dollars, which represented a reduction of 7.2% year-on-year.

The most important setbacks were observed in exports of steel products (-16.1%), professional and scientific equipment (-12.1%), machinery and special equipment for various industries (-9.5%), automotive products (- 7.2%) and electrical and electronic equipment and appliances (-3.2 percent).

The value of agricultural and fishing exports in the seventh month of the current year totaled 1,078 million dollars, an amount that implied a negative variation of 13% at the annual rate.

In contrast, the most relevant annual increases were reported in exports of raw coffee beans (88.3%) and tomato (32.2%). As for extractive exports, these were located at 567 million dollars with an annual rate of 3.7 percent.

In the January-July period of this year, the value of Mexico’s exports was 218,716 million dollars, which represented an annual fall of 17.9 percent. 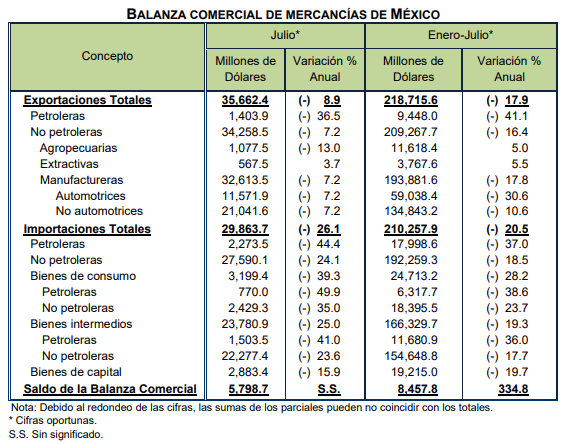 This rate was derived from setbacks of 16.4% in non-oil exports and 41.1% in oil companies

With series adjusted for seasonality, in July of the current year, Mexico’s exports reported a monthly growth of 9.81%, which was the result of increases of 10.18% in non-oil exports and 1.46% in oil companies.