On average, Mexico accounted for 57% of total manufacturing shipments from Latin America and the Caribbean (LAC) between 2019 and 2021, followed by Brazil, Chile and Argentina.

Overall, the share of manufactures in total exports of goods is higher in Central America, the Caribbean and Mexico than in South America, according to an ECLAC report.

In fact, in the last two decades most of the countries in the first group have seen the share of manufactures in their total shipments of goods increase. 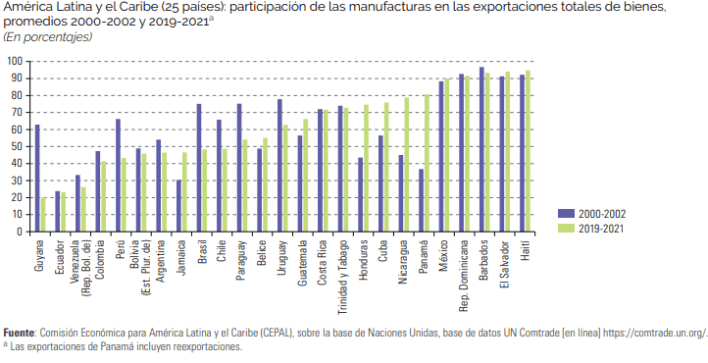 The opposite has occurred in all South American countries, which have deepened their specialization in the export of raw materials.

The United States is the main destination market for regional manufactured exports, with a 57 percent share of the total in the three-year period 2019-2021, followed by the region itself, with 15 percent.

Excluding Mexico, the region becomes the leading market for manufacturing exports, with a 30 percent share.

Over the period 2000-2021, the share of manufactured goods in the value of the region’s total exports of goods fluctuated between 62 and 75 percent.

Its minimum weight was recorded in the 2011-2012 biennium, towards the end of the so-called commodity supercycle.

Since then, its share has recovered and reached 66 percent of total shipments in 2021.

If Mexico (the main regional exporter in this sector) is not included, the weight of manufactures in the region’s total shipments of goods falls sharply, reaching only 49% in 2021.

In the three-year period 2000-2002, the region’s main manufacturing export sector was machinery and electrical appliances, with almost a quarter of total shipments, followed by the automotive and chemical and pharmaceutical sectors.

In contrast, in the three-year period 2019-2021, the automotive sector ranked first with 20% of regional manufactured exports, followed by machinery and electrical appliances.

The food, beverages and tobacco sector moved into third place. If Mexico is excluded, the sectoral distribution of exports changes markedly.

The main export sector is now food, beverages and tobacco, followed by metals and metal products, both linked to the processing of South America’s abundant natural resources.

On the other hand, the automotive and electronics sectors are no longer among the main export sectors.