Mexico, Chile and Peru have increased their imports of oats from Canada, which is the largest exporter of that cereal worldwide.

In fact, Canada has been the world’s leading exporter of oats for the past three decades.

For the 2021/22 cycle (October-September), Canadian exports are forecast at 1.1 million tonnes, dramatically below previous years and the lowest level since 2003/04, according to the United States Department of Agriculture (USDA). 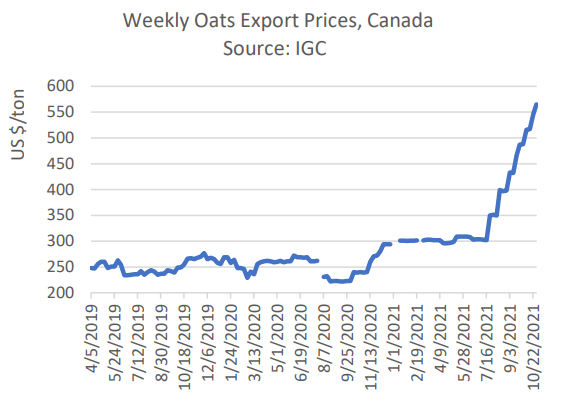 Generally, about half of Canada’s production is destined for export.

Canadian production is currently forecast at 2.3 million tonnes, 50% less than a year ago due to hot and dry weather last summer.

Reflecting the supply situation, export prices have skyrocketed since July, reaching $ 565 per tonne in October, the highest level on record.

The United States has been the main destination for Canadian oats. On average, just over 60% of the oats consumed in the United States is imported, supported by demand for food and industrial uses, as well as the demand for high-quality horse feed.

Meanwhile, in recent years, Mexico, Chile, and Peru have increased Canadian oat imports as these countries have expanded their processing sectors for the export of oat-based food products to neighboring countries.

USDA expects reduced supplies in Canada to boost export opportunities for other oat exporters, including Australia and the European Union.

The oat (Avena sativa), sometimes called the common oat, is a species of cereal grain grown for its seed, which is known by the same name (usually in the plural, unlike other cereals and pseudocereals). While oats are suitable for human consumption as oatmeal and rolled oats, one of the most common uses is as livestock feed.