Globally, according to the Australian government, copper consumption is expected to continue to recover in 2021, driven by improved economic growth and the essential role of copper in electrification.

To China, Mexico directed 82.5% of its copper mineral exports (including concentrates) in 2020.

Mexican foreign sales of these products represented a record, according to data from the Ministry of Economy.

The Australian government indicated that after increasing an estimated 2% in 2020, global consumption of refined copper is forecast to increase 5% in 2021, to reach 25 million tonnes.

This growth in consumption is also expected to come from strong industrial and construction activity in China, as well as increased economic activity in India, the United States and Italy.

Manufacturing indices for these countries showed an expansion during January and February, and is expected to continue throughout the year.

China consumes half the world’s copper and was the main driver of the tight copper market towards the end of 2020.

The China Purchasing Managers Index (PMI) declined in January and February, although it remains in expansionary territory.

Overall, consumption for the March quarter is expected to be healthy as industrial, construction and manufacturing activity remains unusually strong amid reduced Lunar New Year closings.

In addition, China’s copper consumption is forecast to grow by an average of 3% annually to reach 15 million tonnes in 2022. 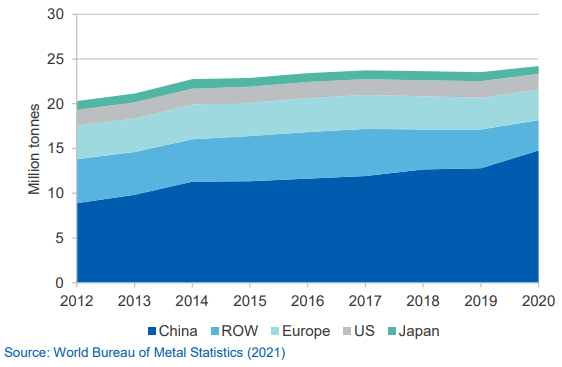 Twenty years ago, China accounted for 10% of world copper consumption.

This participation has increased significantly as consecutive five-year plans have established paths for economic development.

China’s fourteenth five-year plan (for 2021-2025) outlines the investment areas expected to support future copper consumption, although the plan is under development with specific policies yet to be announced.

These include new investments in infrastructure, such as high-speed railways and telecommunications cabling, which are expected to allow greater use in the medium term.

Increased adoption of low-emission technologies, including the electrification of transportation and increased use of renewable energy, is expected to see copper use expand into growing markets for electric vehicle batteries and charging infrastructure.