The Ministry of Economy of Mexico reported that it will maintain the final compensatory quota of 56.85% to metoprolol imports originating in India.

The product is an adrenergic receptor antagonist whose therapeutic indication is mainly the treatment of hypertension, as a single agent or in combination with other antihypertensive drugs.

Initially, on July 25, 2014, the final resolution of the anti-subsidy investigation on the imports of metoprolol tartrate originating in the Republic of India, regardless of the country of origin, was published in the Official Gazette of the Federation (DOF). Through said Resolution, the Secretariat determined a final compensatory fee of 56.85 percent.

Then, on September 11, 2018, the Notice on the validity of countervailing duties was published in the DOF.

By this means, the national producers and any person with a legal interest were informed that the definitive countervailing duties imposed on the products listed in said Notice would be eliminated as of the expiration date indicated therein for each one, except that a domestic producer express in writing its interest in having an examination procedure initiated. The list included metoprolol, the subject of this review.

Thus, on June 13, 2019, the Sinbiotik company expressed its interest in having the Ministry of Economy begin the examination of the validity of the final countervailing duty imposed on metoprolol imports originating in India.

On July 1, 2019, the Secretariat published in the DOF the Resolution declaring the beginning of the examination of the validity of the countervailing duty imposed on imports of metoprolol tartrate originating in India. 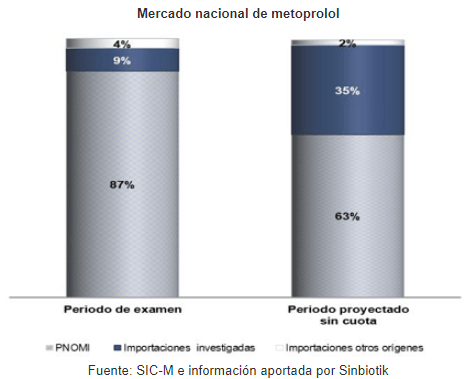