Mexican exports to the United States grew 9.8% year-on-year in July, to $ 31.908 million, the Commerce Department reported.

For its part, China exported products worth 40.368 million dollars, which meant a fall of 0.7 percent. 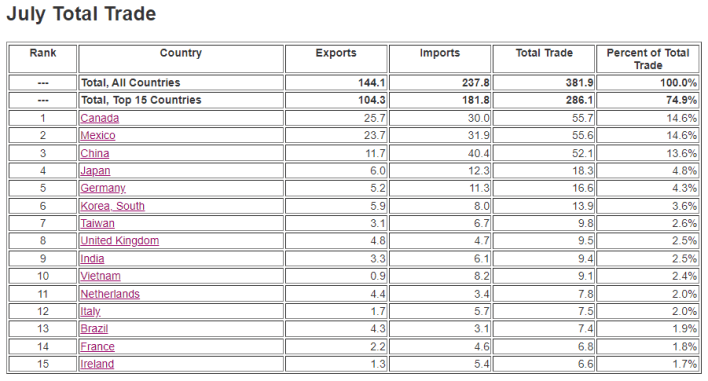 The United States went from a seasonally adjusted quarterly expansion of 1.5% in the first quarter of 2021 to one of 1.6% in the second.

The dynamism of private consumption and business investment contributed to this.

In contrast, according to the Bank of Mexico, residential investment contracted and net exports continued to contribute negatively to growth.

Similarly, government spending had a negative contribution reflecting, in part, a decrease in the number of processed applications of the payroll protection program (PPP) compared to the first quarter of 2021.

In this environment, purchasing manager indices suggest that growth in that economy, although it could moderate, would continue to be high.

Regarding the Mexican economy, industrial production showed low dynamism in the second quarter in all the sectors that comprise it, highlighting the weakness of construction and manufacturing.

Among the latter, the difficulties caused by the shortage of certain inputs and other logistics problems, especially in the transport equipment sector, stand out.

For their part, primary activities have registered volatility in their behavior.

In the accumulated from January to July 2021, Mexican exports to the US market were 218,348 million dollars, which represented an increase of 26.2% compared to the same period of the previous year.