The shortage of chips contributed to the zero growth of Mexican exports of products in October, reported Inegi.

During that month, Mexican foreign sales totaled 41.957 million dollars, which represented an increase of 0.01%, at an annual rate.

Conversely, Mexico‘s imports totaled 44,658 million dollars and, therefore, the country had a deficit of 2,701 million. 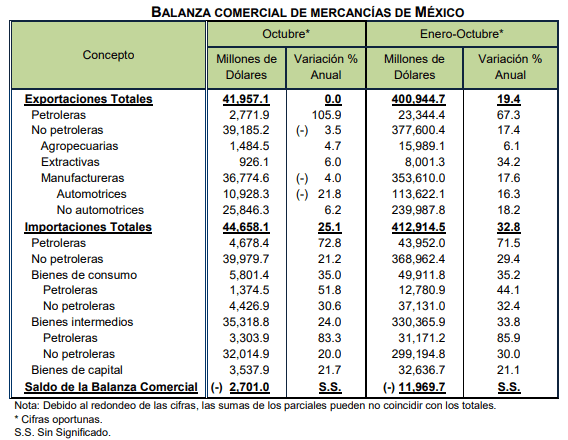 Thus, in the reference month, total exports showed a level similar to that of October 2020 (annual variation of 0.01%), the net result of an increase of 105.9% in oil exports and a reduction of 3.5% in non-oil exports. .

Within non-oil exports, those directed to the United States decreased at an annual rate of 2.6% and those channeled to the rest of the world did so by 7.7 percent.

On the other hand, the rise in the value of imports was a reflection of advances of 21.2% in non-oil imports and 72.8% in oil imports.

When considering imports by type of good, annual increases of 35% were observed in imports of consumer goods, 24% in intermediate-use goods and 21.7% in capital goods.

Integrated circuits, optoelectronics, sensors, and discrete components (O-S-D), such as power chips, LEDs, and some MEMS, are semiconductor devices made of silicon and composite semiconductors, such as silicon carbide, wafer substrates.

Semiconductor chips are part of the circuits of many products, including inverters, on-board charging, computers, telecommunications devices, automotive electronics and sensors, consumer electronics, and industrial automation and control systems.

So far, difficulties in acquiring semiconductors have caused major production disruptions in the automotive industry.

The automotive industry in Mexico contributes around 18.5% of the manufacturing Gross Domestic Product (GDP) and the size of the local market for the sector is 70.8 billion dollars.