Mexican exports registered a year-on-year growth of 15.2% in July 2021, Inegi reported this Friday.

Within non-oil exports, there were annual advances of 10.6% in those directed to the United States and 15.6% in those channeled to the rest of the world. 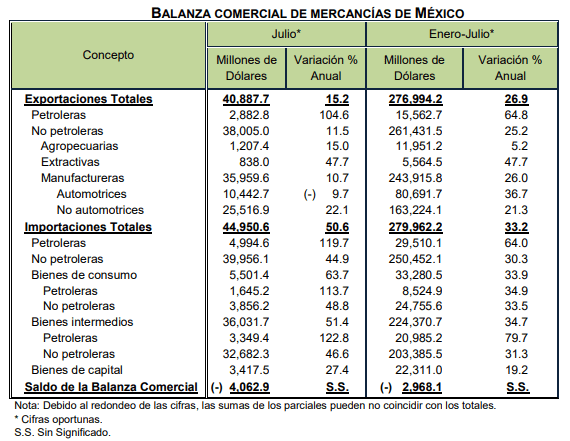 On the contrary, Mexican merchandise imports were for 44,950.6 million dollars, an advance of 50.6% year over year.

With this, Mexico had a deficit of 4,062.9 million dollars in July.

Exports of manufactured products reached 35,960 million dollars in July 2021, which represented an advance of 10.7% at an annual rate.

The most important annual increases were observed in exports of steel products (76.9%), food, beverages and tobacco (26%), professional and scientific equipment (18.3%), electrical and electronic equipment and appliances (17.2%). %) and machinery and special equipment for various industries (12.6 percent).

For their part, exports of automotive products showed an annual decline of 9.7%, which was derived from decreases of 10% in sales channeled to the United States and a fall of 8.1% in those directed to other markets.

The value of agricultural and fishing exports in the seventh month of the current year was 1,207 million dollars, an amount that implied an annual increase of 15 percent.

In contrast, the most relevant annual reductions occurred in frozen shrimp exports (68.2%) and cattle (29.2 percent).

As for extractive exports, these were located at 838 million dollars with an annual increase of 47.7 percent.

In the period January-July 2021, the value of total exports totaled 276,994 million dollars, which represented an annual growth of 26.9 percent. This rate was a reflection of advances of 25.2% in non-oil exports and 64.8% in oil companies.