Thus, in the reference month, Mexico’s exports reported an annual reduction, the net result of a 1.7% drop in non-oil exports and an increase of 10.7% in oil companies.

In addition, as part of non-oil exports, those directed to the United States decreased at an annual rate of 2.9%, while those channeled to the rest of the world increased 4 percent.

With series adjusted for seasonality, in February 2021 total merchandise exports showed a monthly drop of 3.65%, which was the result of reductions of 3.67% in non-oil exports and 3.28% in oil exports.

In manufacturing, the most important setbacks were observed in exports of automotive products (-10%), of paper, printing and publishing industry (-7.1%), of machinery and special equipment for various industries (-6.9%), of professional and scientific equipment (-2.4%) and manufacturing of other non-metallic mineral products (-0.8 percent). 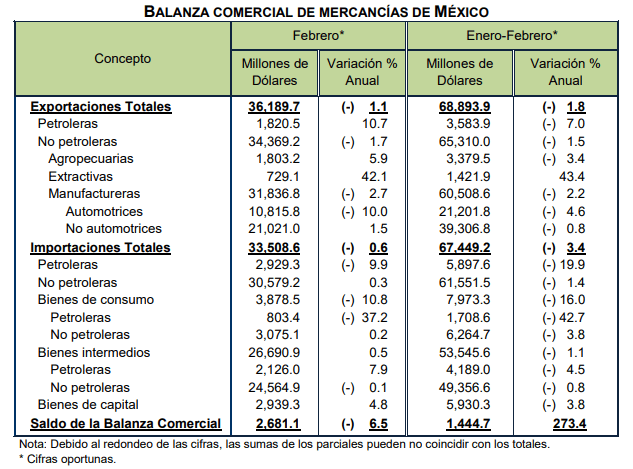 In turn, the annual drop in exports of automotive products was the result of a 11.6% drop in sales channeled to the United States and a 1.1% drop in sales to other markets.

The value of agricultural and fishing exports in the second month of the current year was 1,803 million dollars, an amount that implied an increase of 5.9% at an annual rate.

In contrast, the most outstanding annual decreases were presented in exports of frozen shrimp (-22.7%) and cucumber (-19.4 percent).