Totaling 602 million dollars, Mexican imports of cheese and cottage cheese broke a record in 2021, according to data from the Ministry of Economy.

With this, these foreign purchases grew at an interannual rate of 12.7 percent.

Previously, in 2020, Mexican imports of cheese and cottage cheese fell 1.8%, at an annual rate.

Of all these shipments, around 80% come from the United States, while other relevant suppliers are the Netherlands, Uruguay, Chile and New Zealand. 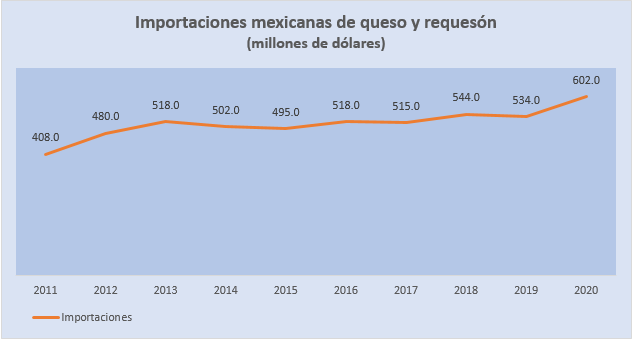 In the United States, the Department of Agriculture (USDA) forecasts that US cheese exports in 2022 will be slightly higher than in 2021.

The USDA anticipates that a slowdown in milk production growth, coupled with relatively strong domestic demand, will limit exportable supplies.

However, cheese shipments have been strong in 2021 and its export forecast has been revised upwards by 9% to 412,000 tonnes.

This is largely due to shipments to Mexico, which through October 2021 had grown 9% year over year and account for roughly a quarter of US shipments.

Other major destinations for US cheese exports include South Korea, Japan and Australia, which combined account for about a third of US cheese shipments.

In particular, the global vegan cheese market size was valued at $2.1 billion in 2019 and is projected to increase at a compound annual growth rate of 8.6% between 2019 and 2028 by the International Monetary Fund (IMF).

Despite the logistical challenges posed by the Covid-19 pandemic, US dairy exports had a stellar year in 2019, led by shipments of skim milk powder (SMP), cheese and butter, according to the USDA. .