The number of cross-border mergers and acquisitions fell 15% in the first eight months of 2020, at an annual rate, the United Nations Conference on Trade and Development (UNCTAD) reported on Thursday, without specifying the number of transactions.

In developed economies, where they represent a significant part of total Foreign Direct Investment (FDI), mergers and acquisitions fell 21% year-on-year in the same period.

Meanwhile, in developing economies, its value increased by 12%, as the sharp decline in Africa (-44%) and Latin America and the Caribbean (-73%) was more than offset by a 60% increase in Asia.

The number of cross-border mergers and acquisitions also increased (84%) in transition economies, but starting from a very low base and mainly reflecting corporate restructurings.

The number of announced cross-border project finance deals decreased by 25% in the first eight months of 2020, with the largest drops occurring in the third quarter, suggesting that the decline in these projects was still accelerating.

The number of announced projects in transport infrastructure and fossil fuel energy fell the most. 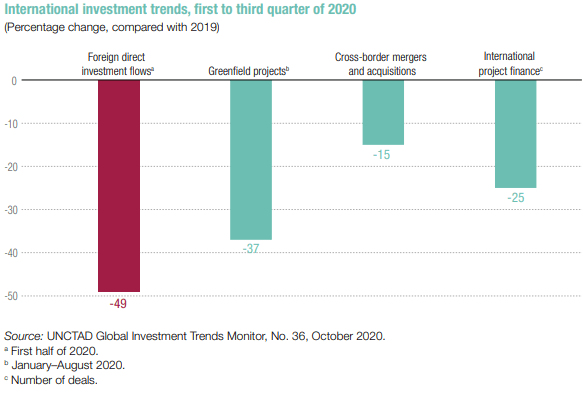 This would bring FDI below $ 1 trillion for the first time since 2005.