The companies Megacable-MCM, Televisa and Total Play gained share in the fixed telephony market in Mexico in the second quarter of 2020, according to the latest data available from the Federal Telecommunications Institute (IFT). 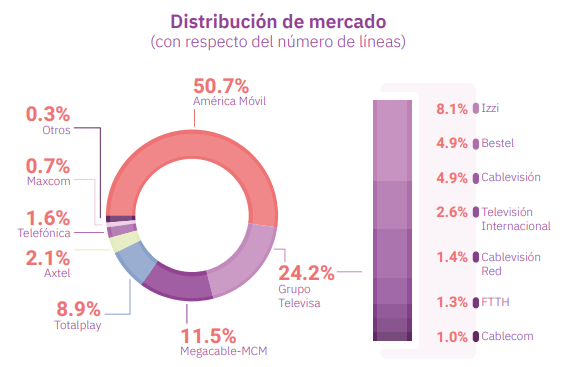 In June 2020, the number of fixed telephone lines without considering public telephone booths, reached 22.8 million lines throughout the national territory.

With this, the penetration of the service reached 65 lines for every 100 households.

On the other hand, Televisa increased its market share to 21.4 to 24.2%, comparing the same periods.

Foreign companies must be incorporated in Mexico to operate in the telecommunications market. The opening to foreign investment has resulted in the entry of new operators to the market and the execution of various investment projects.

Lastly, the institutions that operate in the sector are the Ministry of Communications and Transportation (SCT) that defines and implements the telecommunications policy, and the IFT that regulates the sector.