It is also found that WTO Members have eliminated tariffs on more than 84% of medical products by 2020 under their various RTAs.

Furthermore, medical products are subject to an average tariff of 1.6% under RTAs, compared to the average tariff of 3.8% imposed on products traded outside RTAs, indicating that there is scope for further liberalization in the WTO.

A WTO report also examines other provisions in RTAs that may restrict or facilitate trade and underlines the need to forge mutual recognition agreements that recognize standard conformity assessments carried out by authorities in other countries.

The share of exports from the world’s top 10 medical product exporters to their partners in regional trade agreements (RTAs) ranges from 27% for China to almost 75% for Italy. Most of the top 10 traders of these products are Member States of the European Union.

In their RTAs, WTO Members have liberalized 84% of these products in 2020. The percentage is higher for developed Members (99.5%) than for developing Members (84.3%) and Least-developed members (68.4 percent). 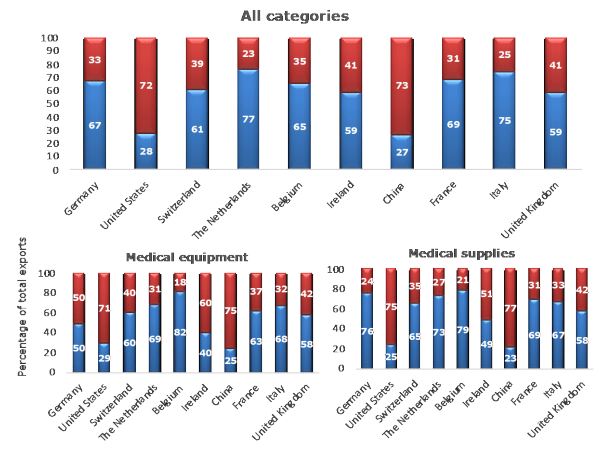 Developed Members under study had eliminated tariffs (both most-favored-nation (MFN) tariffs – that is, non-discrimination between trading partners – and preferential tariffs) on medicines and in their RTAs on medical equipment and personal protective items (compared to an average MFN rate of 0.2% and 2.2% respectively).

The average preferential rate in these countries for medical supplies is 0.5%, compared to an average MFN rate of 1.8%.