The company makes sales in the domestic and export markets, mainly to Japan, South Korea and China, as well as to the United States, Canada, Hong Kong and Chile.

Grupo KUO markets its pork products under the “Kekén” and “Kiniton” brands (the latter brand only for the export market).

Its leadership derives from vertical integration, which includes: food plants, farm structure, processing plants, marketing through “Maxicarne” stores and its own routes that allow it to have a presence in the national territory, mainly in the southeast.

Likewise, its sales are made through its own marketing channels.

The investment in productive assets during 2019 was 3,537 million pesos. The resources were mainly assigned to the expansion of the Pig business, highlighting a processing plant, a balanced food plant and a reproduction center, inaugurated in May of that year.

The production of the Pig business is concentrated in the Southeast region of Mexico, where there are favorable sanitary conditions since it is geographically isolated and in a zone free of the main pig diseases. 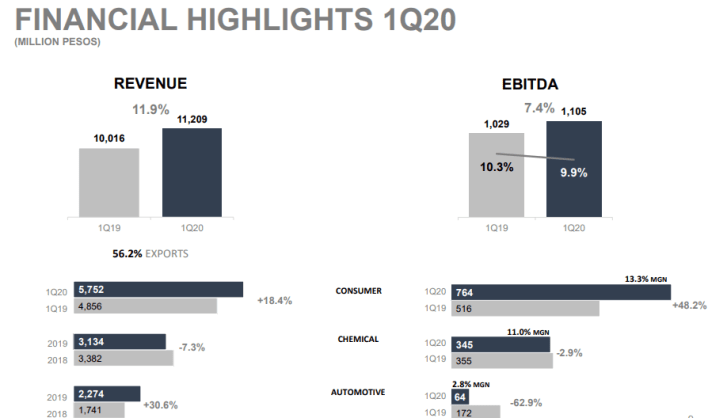 Similarly, it has processing plants in Guanajuato, Campeche and Yucatan.

The niches where it has prestige and greater presence have been strengthened, creating value by positioning its leadership in the production and marketing of pork cuts; as well as with the export of value-added products.