Maritime trade had differentiated impacts in Latin America due to the Covid-19 pandemic, reported the Economic Commission for Latin America and the Caribbean (ECLAC).

The later arrival of Covid-19 meant that, until January 2020, this region showed results in maritime trade that were higher than the average for the rest of the world.

Thus, during the period from January to June 2020, the maritime trade activity by containers on the east coast of South America registered a reduction of 2.4% compared to the same period of the previous year.

In Central America, the Caribbean coast and the Pacific coast registered decreases of 6.1% and 3.2%, respectively.

On the other hand, in the Caribbean there was a reduction in maritime trade of 3.1%, while on the west coast of South America, the decrease was 12.2 percent.

Finally, in Panama, there were more pronounced drops in trade, of -23.1% on the Caribbean coast and -32.0% on the Pacific coast.

The lower commercial activity along the coast can also be analyzed at the port level.

Although there is a 6.5% reduction in maritime trade in containers at the regional level, there is a small group of ports in which there was a growth in commercial activity, such as Corinto, in Nicaragua (0.9%); Santa Marta, in Colombia (1.5%); Paranaguá, in Brazil (3.8%), and Puerto Castilla, in Honduras (9.7 percent).

To face the decrease in transport demand, shipping companies have implemented containment measures, such as the cancellation of trips (or blank sailing), which consists in that, during a specific week, fortnight or month – depending on the frequency of the line service—, a given area does not have a vessel to unload or load cargo. In this way, the supply of services is reduced and it is possible to maintain —and even on some routes, raise— the freight of maritime transport. 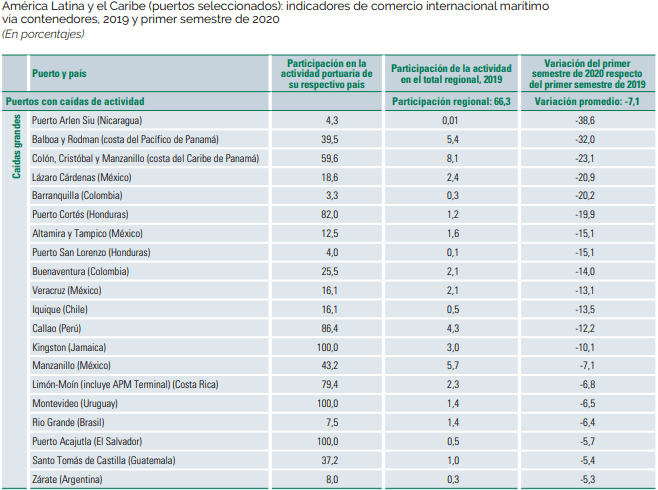 As a result of this arrangement, a worldwide transmission capacity drop of more than 2 million TEU is observed, which represents 8.8% of the global total.

During the first week of June 2020, the fleet of inactive container ships reached a maximum of 551 ships, a figure that represents 2.72 million TEU and is equivalent to 11.6% of the world fleet.

The main cancellations affected the trans-Pacific routes, as well as those of Asia, Northern Europe and the Mediterranean.

The number of trips canceled during the first three weeks of July 2020 was 49% higher than in the same period in 2019.

In terms of operators, Ocean Alliance has so far announced capacity reductions of between 1% and 4% on the Asia-Europe route, compared to the reduction range of 20% to 25% indicated by its competing alliances 2M and THE Alliance.

In the case of the trans-Pacific route, the Ocean Alliance reductions are in the order of 2% to 5%, compared to between 3% and 10% in the case of 2M and between 9% and 15% in THE Alliance.

Finally, in the case of Latin America and the Caribbean, between January and April 2020, 20 blank sailings were recorded on the west coast of South America and 4 on the east coast.