The manufacturing sector received 40.6% of the total FDI that Mexico captured from January to June 2021, the Ministry of Economy reported this Friday.

Other relevant sectors in that same indicator were the following: mining, 13.5%; financial and insurance services, 11.6%; transportation, 10.3%; commerce, 8.6% and temporary accommodation services, 3.9 percent. 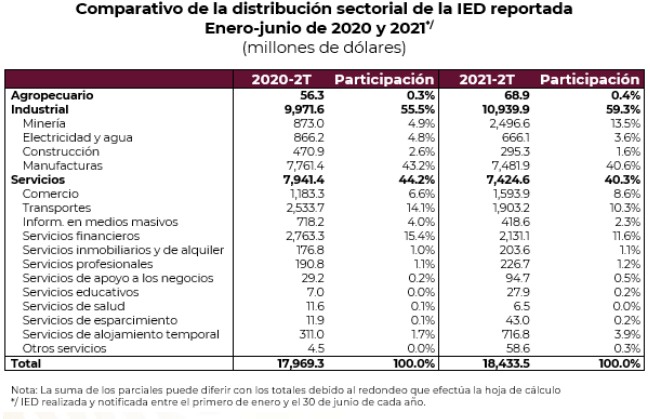 Mexico has developed its manufacturing sector with the dual objective of capitalizing: lower manufacturing overhead and its common border with the United States, its main export trading partner.

From 2016 to 2019, Mexico’s total industrial production increased significantly. The expansion was primarily due to an increase in the primary metal manufacturing and fabricated metal products and transportation equipment sectors, as well as an increase in manufactured exports to the United States.

Overall, in 2020, manufacturing output performed worse than in 2019.

The decline in manufacturing production occurred in the context of a general decline in Mexico’s economy due to the negative effects of the Covid-19 pandemic, including operating restrictions in non-essential industries, reduced operating capacity, transportation networks and disrupted supply chains and mandatory shutdowns to contain subsequent waves of infections.

In Mexico, land concessions or discounts, tax deductions, and technology, innovation, and financing for workforce development are commonly used incentives.

According to the United States Department of State, additional federal incentives to foreign trade include:

In addition, manufacturing companies and other companies report that it is increasingly difficult to request and receive refunds of value added tax (VAT) paid for inputs for the export sector.

Most of the foreign investment flows to the northern states near the border with the United States, where most of the maquiladoras (export-oriented manufacturing and assembly plants) are located, or to Mexico City and the nearby region of “El Bajío” (for example, Guanajuato, Querétaro, etc.).

In the past, foreign investors have bypassed the southern states of Mexico, although the administration is focused on attracting investment to the region, including through large infrastructure projects such as the Mayan Train, the Dos Bocas refinery and the project railway transistmo.