The most significant inflow of investments into Poland during 2021 was in the manufacturing industry, amounting to €9,057 million.

There were also significant inflows in professional, scientific and technical activities (€5,049 million) and wholesale and retail trade (€4,049 million).

According to Polish government data, net inflows of Foreign Direct Investment (FDI) into Poland amounted to €25,011 million in 2021. 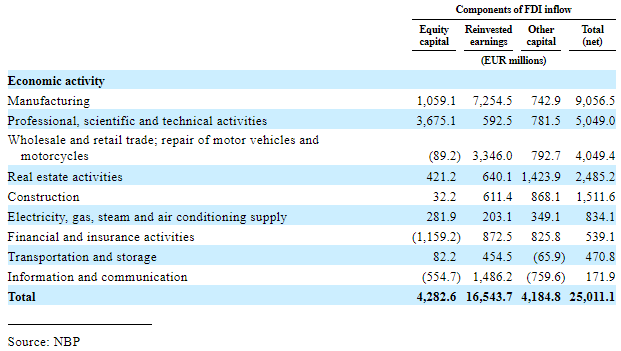 In particular, inflows from European Union (EU) countries amounted to €21,184 million, mostly from Spain, Germany, the Netherlands and France.

Net inflows from non-EU countries amounted to EUR 3,827 million, the most significant being from the Republic of South Korea.

Conversely, the most significant imported items are similar to those dominating exports, with chemicals and allied products playing a relatively more important role than in exports.

After the Russian invasion of Ukraine, the influx of Ukrainians to Poland, especially women and children, has increased dramatically.

However, the Russian invasion of Ukraine has also caused the outflow of some Ukrainian workers previously employed in Poland, especially men who have returned to defend their homeland.

The effect of the outflow is noticeable especially in manufacturing, construction, logistics and shipping, which together accounted for 66% of all work permits issued in 2021 to foreigners.

On the other hand, the influx of Ukrainians is expected to cover staffing needs in female-dominated industries.