The World Trade Organization (WTO) was born in 1995, making it one of the youngest international organizations.

Furthermore, the WTO is the successor to the General Agreement on Tariffs and Trade (GATT), established after the Second World War.

Thus, although the WTO is a relatively young organization, the multilateral trading system originally established under the GATT is over 70 years old.

The system was created through a series of trade negotiations, or rounds, held under the GATT.

Although the first rounds focused primarily on tariff reductions, other issues, such as anti-dumping and non-tariff measures, were addressed in subsequent negotiations. The Uruguay Round, which ran from 1986 to 1994, led to the creation of the WTO. 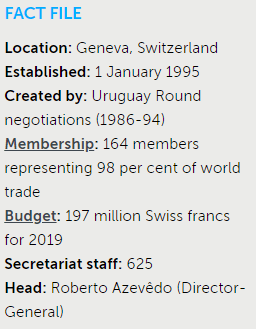 But that did not mean the end of the negotiations. According to this organization’s own version, an agreement on telecommunications services was reached in 1997, in which 69 governments accepted a series of far-reaching liberalization measures that went beyond those agreed during the Uruguay Round.

That same year, 40 Governments successfully concluded the duty-free trade negotiations for information technology products, and 70 Members entered into an agreement on financial services that covers more than 95% of trade in banking services, insurance, operations with values ​​and financial information.

Then in 2000, new talks on agriculture and services began. These talks were integrated into a broader work program, the Doha Development Agenda, which was launched at the Fourth WTO Ministerial Conference in Doha, Qatar, in November 2001.

The new work program included trade negotiations and other work with regard to tariffs on non-agricultural products, trade and the environment, WTO rules on anti-dumping and subsidies, trade facilitation, transparency public procurement, intellectual property and a number of issues raised by developing economies as difficulties they encounter in implementing the WTO Agreements.

Negotiations on these and other issues have led to major updates to the WTO set of rules in recent years. The revised Public Procurement Agreement, which was adopted at the Eighth WTO Ministerial Conference in 2011, expanded the scope of the original Agreement by about $ 100 billion a year.

At the Ninth Ministerial Conference in Bali in 2013, WTO Members concluded the Trade Facilitation Agreement, which aims to reduce border delays by simplifying red tape.

Pursuant to the expansion of the Information Technology Agreement concluded at the Tenth Ministerial Conference in Nairobi in 2015, the tariffs on 200 additional information technology products, whose annual trade has been valued at more than 1.3 trillion dollars.

Another result of the Conference was the decision to eliminate export subsidies for agricultural products, thereby fulfilling a key goal of the United Nations Sustainable Development Goal «Zero Hunger».

An amendment to the WTO Agreement on Trade-Related Aspects of Intellectual Property Rights (TRIPS Agreement) entered into force in 2017 to facilitate access by poor economies to affordable medicines. That year, the Trade Facilitation Agreement also entered into force.

How is COVID-19 transmitted?