Consumer confidence, which is a significant driver of new vehicle sales, deteriorated significantly in the second quarter of 2020 as a result of the Covid-19 pandemic.

Overall, global consumer confidence levels saw a record drop in the second quarter compared to the first quarter, due to factors such as deteriorating job prospects and increased anxiety about personal finances.

Going forward, key factors that may further affect the recovery in consumer confidence include Covid-19 infection and death rates, as well as the ongoing economic impact of the pandemic on household finances, particularly to as government support programs decline.

New light vehicle sales in the company‘s two largest markets, North America and Europe, deteriorated in the second quarter of 2020 compared to the first quarter, due to mandatory stay-at-home orders and other measures aimed at reducing the spread of Covid-19 inhibited consumers’ ability to purchase vehicles.

However, during the second quarter, new light vehicle sales in both North America and Europe showed signs of recovery, continuing through July.

Based on Magna International’s expectations at the beginning of the year, the company estimates that reduced volumes in the quarter resulted in lost sales of approximately $ 5.5 billion and adjusted Earnings Before Interest and Taxes (BAII) were adversely affected. for approximately 1.2 billion. 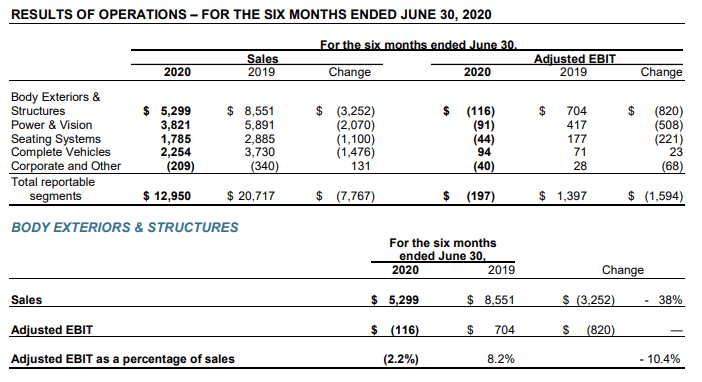 For the six months ended June 30, 2020, Magna International estimates that such lost sales amounted to approximately $ 6.6 billion and adjusted EBIT was negatively impacted by approximately $ 1.45 billion.