The logistics sector in Hong Kong showed a mixed performance in the third quarter, according to information from the Hong Kong government.

In terms of ports, total container movement decreased 1.5% from the previous year, to 4.6 million 20-foot equivalent units (TEU), as congestion in many ports around the world also affected ship schedules entering and leaving Hong Kong.

While the value of trade handled at the Hong Kong port increased 21.7% in the third quarter, its share of total trade dropped from 13.7% a year earlier to 13.4 percent. 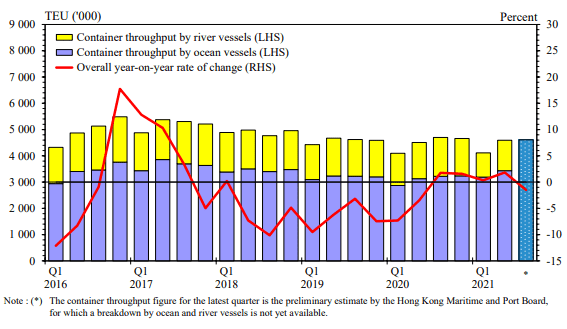 Air transport movement rose 15.6% from a year earlier, to 1.3 million tons in the third quarter, a high level by historical standards.

Traffic flows for all modes of cross-border passenger transportation saw some increases in the third quarter from the previous quarter, but were still significantly below pre-recession levels, as most of the control measures in Limits and quarantine requirements in response to Covid-19 remained in place.

While higher than the prior quarter and the same quarter last year, these figures were just a fraction of the respective daily averages of around 209,600, 721,100, and 48,600 in the second quarter of 2019 before the recession.

Meanwhile, daily cross-border vehicle movements averaged 17,351 in the third quarter, just 39% of the daily average in the second quarter of 2019.