Exports of medical devices from Latin America and the Caribbean reached a record value of 19.093 million dollars in 2018, which represented 1.8% of the region’s exports of goods in said year.

This position was achieved after the sustained growth in recent years, with an average annual rate of 7.4% since 2015 (more than double 3.0% of world exports), based on ECLAC statistics.

It should be borne in mind that ECLAC only took into account the tariff lines for goods identifiable as medical devices, based on the medical supplies and medical equipment included in the WTO, without considering the medical supplies corresponding to the chemical or pharmaceutical industries.

This set does not include machines or devices of ambiguous use (such as some weighing and measuring machines, or refrigeration devices), which can be used in the hospital environment, but whose end use is not identifiable to six digits of the harmonized system Nor are textile products, which have the same identification problem.

With regard to imports, the demand for these products from Latin America and the Caribbean in the international market is lower than their weight in the total market, with a 4.9% share in medical devices compared to 5.7% in total imports of goods (average 2014-2018).

The good export positioning in these devices is not due to an extended specialization in the countries of Latin America and the Caribbean.

On the contrary, it is explained by the exports of very few countries: Mexico and Costa Rica in first and second place, respectively, followed by the Dominican Republic and Brazil.

Mexico has been the country with the highest export value in the region and the seventh exporter in the world in recent years.

For its part, Costa Rica was positioned as the fifteenth country with the highest value of exports of medical devices in the world between 2014 and 2018.

However, although exports from both countries grew in the period analyzed, the number of destination countries is approximately half that observed in developed countries (with the exception of Ireland) and China. 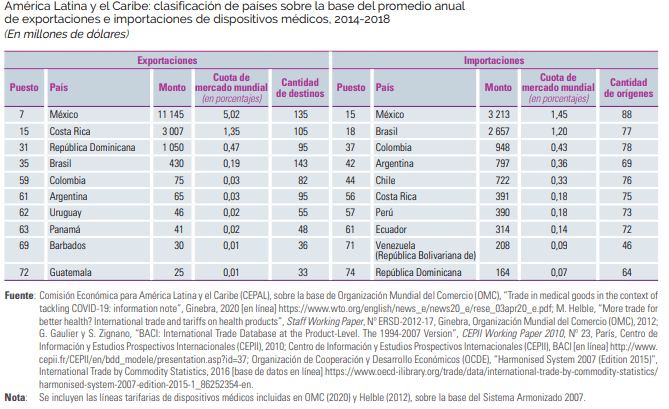 In imports, as in other goods, the largest economies in terms of GDP have been the main markets: Mexico, Brazil, Colombia, Argentina and Chile are the five main importers of medical devices.

In addition to satisfying the domestic demand of the countries of the region, part of the imports are linked to trade within the industry, mainly of inputs, parts or components that are used in the manufacture or assembly of final products.