After collapsing in 2020, registering a decline of 10%, exports from Latin America and the Caribbean would increase by 22% in 2021, ECLAC projected.

This dynamism would be driven by a 16% rise in prices and a 6% expansion in volume.

In particular, the Asia region would be the main destination for increased shipments from the region.

That destination was the only one to which regional exports increased in 2020, and in the first four months of 2021 there were increases in the exported value of between 35 and 45 percent.

In the period January-April 2021, the value of intra-regional trade expanded 19% compared to the same period in 2020, with which it would recover values ​​close to those of 2019.

According to ECLAC, this dynamism reflects the ongoing economic recovery: imports of capital goods and intermediate inputs necessary for production expanded at rates higher than the average (between 30 and 40 percent).

The recovery in intra-regional trade is very positive for MSMEs, which are crucially dependent on the region’s markets.

In the subregions, the behavior of exports from Latin America and the Caribbean is heterogeneous.

On average, countries with a high composition of energy products in their export basket would have increases of 40% in the value exported.

Meanwhile, in countries with mineral-intensive shipments, the increase would be 27%, while the countries that export agricultural and livestock products from the Southern Cone would show increases of 20 percent.

For their part, for Mexico and Central America the exported value would increase by 11 percent.

For the average of South America, an increase in the prices of primary products leads to a positive shock in the terms of trade.

Latin America and the Caribbean (selected countries and subregions): projected variation in exports and imports of goods for 2021 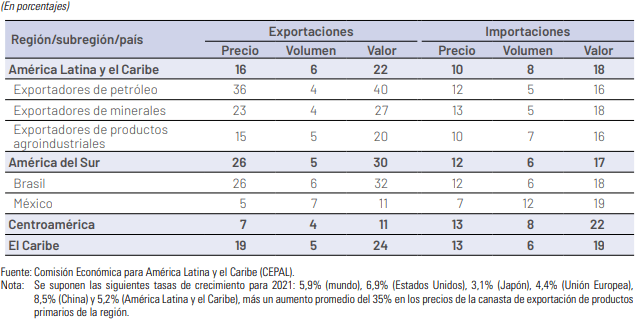 The expansion of trade is explained by three interrelated factors: i) the increase in the prices of raw materials, ii) the recovery of demand in China, the United States and the European Union and iii) the recovery of economic activity in the region.

In the increase in trade, the price component prevails over the volume component, which deepens the lock-in effect on the export structure.